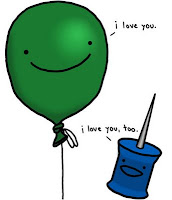 I've jus put on some night cream and I'm slowly creeping into my bed ! It's when you are alone that all those thoughts come swinging back into action, as if they were waiting jus around the corner to come get you, to blame you for what you have made of yourself. How I would love to agree with Christina Aguilera when she sings


"Falling in love again, never wanted to
What am i to do, i cant help it
Love always been my game, play it how i may
i was made that way, i cant help it "

The symptoms are familiar: the pull in the stomach, the tingling in the arms and lips, the fluttering in the lungs. To meet, to touch, to hold! The obsessive longing -- the wild bouts of fantasy! And then he called : "Do you want to go Dancing?" - Date : Valentine's Day of 2009 ! But this time round I was not 12, I was 22 .. You are hardly a teenager. Yet you feel like one. This is what the French call a coup de foudre -- a bolt of lightning -- out of the blue: BAM! And at your age! The intensity of a coup is matched by its mystery: Why do you fall in love when you do? It felt so spontaneous. Nothing too formal, Will you be my Valentine bullshit ! This is what attracted me. I always knew not everyone lived a Mills and Boons life !

I walked through the crowded bar, my eyes searching. The sex-ratio at that Bar was 1 girl : 5 guys... ! He was lost somewhere in the middle of all this chaos. On the far left i could see a girl make-out with her man. He ran his hand through her touseled hair... No I dont want to get lucky and be her, I was thinking more of how long would they have been together? One night, One month, One decade ? Does time define these acts of love? Anyway, I dashed against this guy and his drink is all over the bottom half of the dress. I just gave him that look and moved on. What was the point of having that conversation, I knew he would be sorry and i needed to focus here ! Not be in any bitter mood till atleast i get to him. He apologised, but I had left him 2 people behind. The bar tender was dishing out some pink mocktail. I made a mental note of it and thought I'll ask him for that one. I would need some drinks to handle his sarcasm somewhere into the night.

Moved another few people, almost squeezed between 2 chairs, GOSH i never thought i would have made my way through that. FOCUS i screamt in my head! What will he be wearing? His camel coloured shoes? I passed this beautiful girl in a red dress and black what looked like the ones i had seen in Nine West the other day. She was with a guy who was slowly trying to what looked like a move on her. But for a minute i thought i could read his mind, he wasn't sure about the whole thing.Then there I saw him, Oh no wait... that wasnt him. It was his Twim Brother ! The brother smiled the " Oh no ! its not me, you are actually looking for my brother look!" I was aghast... why is his brother there, i thought to myself?

Alright, his brother is his best friend, and frankly i didnt expect him to be there alone either. "Howdy!" , Black Shirt, Jeans, Closed shoes, Clean Shaven, Little bald just the way I like him to be and ofcourse a few pounds lighter than when I saw him last. He seemed to be on his 4th beer which was slowly dripping trinklets of water down from his bottle onto his unusually little hands. It was HOT in there, too many people for that little space. He smiled, I smiled back and then he said something, which I couldnt hear, for a minute I wanted everyone to shut up including Bob Sinclair singing World Hold On !! What a co-incidence... Thats the problem with these places. Little uncomfortable talking in his ear with his brother around hey!

If this was a part of a Bollywood movie then one would have expected fireworks to breakout of nowhere,just me and him and nothing else that can be heard, maybe some white smoke out of no-where. But this was reality. What would men in reality ask? Maybe he'd ask if I drove alone, was I going to drink something? Can he buy me a drink perhaps? Ok, maybe I was asking for too much? It was jus a plain simple do you want to go dancing question, if i expected a little less I wouldn't be so disappointed? It jus conincedentally happened to be Valentine's Day right? I dont need to think too much into this for once. But the girl in me took on. The same things that I had liked moments before getting into this bar-which was now making me extremely un-comfortable were now hurting me in the little places of my heart that i didnt know existed. And then he threw the bomb " Oh ! You did come, I thought you would have never come."

My world shattered with his sarcastic comment. So what, he didnt expect me to come? Did it not matter to him whether I was there or not? Did he ask him only for the heck of it? Even after knowing what I feel for him? Just that evening I had asked him," Will you be nice to me?" To which he had replied Ofcourse ! Obviously he didnt follow what he had jus promised. Did I just leave the comfort of the Singles Party i go to every year from the time I last broke up which was exactly 2 years ago for him, who just shrugged when i got there?? Do i deserve this treatment ? Am i not the lucky one who spends a Valentine's day with a Valentine? Is Valentine Day just another over-rated day. And for the first time in my life i actually understood the feeling of when I can say something was truly over-rated and I meant every word of it.

How i ran from there, and who i clung to for some help is all secondary. But thats the day when I realised Love is not something you can make happen and make do. And for as hard as i tried to change the words of destiny... he was not instore for me.
I could have cried myself to sleep or go to the next bar with my friends and move on with my life. The choices people make sometimes determines which turn life will take against destiny. And that is exactly what i did. I gathered all the little pieces of my shattered heart and time is healing them slowly but surely. Maybe he had an upper hand as it seemed that day, making me so vulenerable. It makes me angry that I led myself to believe, I expected him to show the kind of respect i gave him when he came out with my friends. But some people care little about what others feel, but its really not their fault. It's the fault of those who lead them to believe that what they said or did mattered. He had never shown the respect and never would when I think about it today.

So does this mean that there will always be one person who will be dominant in a relationship? Who will make the other one feel vulnerable? The answer to this question lies in the YING and YANG theory. One just needs to find the right person who will fit their puzzle of life to find a balance - where nothing of this will matter. Where it wont be important what he said, or what she says, or what he did and what she didnt do? I know of many a couple who have found their balance and I am sure I will find someone to strike a balance with me before the end of time.
Posted by Disha Doshi Shah

Labels: Being in Love, Nine West