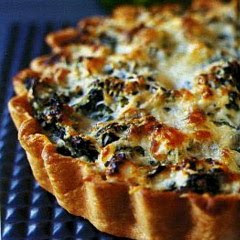 I’d like to be a great cook someday. FOOD binds everyone together. In happiness and in bad times. This weekend we had my mother’s side of the family come over. I finally decided to try the Spinach and Ricotta Cheese tarts that I had been planning on making since my return from my big trip. For starters, I couldn’t find a half decent recipe of making the tart dough without eggs. So I landed up buying ready-made tart shells. What a Bummer ! Life becomes simpler – but the sense of achievement at the end of making it was also reduced by half.

Next on the mind was Ricotta Cheese. At Rs 300 for a measly cube of cheese, by the time I could decide whether or not to buy, some woman scooped up the last remaining cube on the shelf. I thought I’d lost the battle there. Then decided nothing can stop me.. ( Also I didn’t want my mother to scream at me for having bought the tart shells and not knowing what to do with it. ) So I did what every Indian woman does – make do with whatever ingredients they have in their hand – and cook up something entirely different than what they had originally planned.

This is one reason any standard recipe tastes different in different houses ! So, I ended up with half of my favorite ingredients. The end result was good… a bit too garlicky for my taste. But it was too late to alter the recipe – the first of the guests had already ting tonged. Mine was the first starter to be dished out. Thankfully ! DHWANI DOSHI, my elder sister, must I mention an effortless cook had cooked tasty tandoori paneer. At least the guests forgot all about my tarts by the time they gorged on the lip smacking paneer chunks ! I have to learn a lot about Cooking and Food Decoration from my sister.

p.s. – The picture is what the tart was supposed to look like ; )
Posted by Disha Doshi Shah