Will you Marry me ? 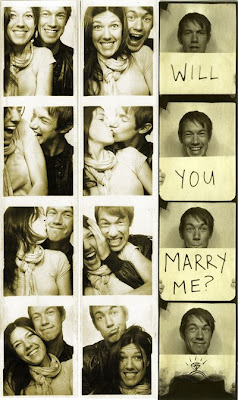 This week I am going to be attending 2 different parties... One is Akshay and Payal’s engagement Ceremony and the other is Vikram and Juhi’s Pre-Wedding Bash...! I can’t help but wonder how my view about marriage has changed over the years. When I was about 10 years old I was convinced I wanted to get married the very next day. I would literally dream about getting married to this pretty witty, intelligent, funny smart boy... ! I would run around wearing a Saree, end up spending half my free play time dressing up in front of the mirror. Re-hearsing what I am going to say, how I am going to do things differently. I would also put on heaps of make up, accessorise, and wear shoes too big for my feet. I also wanted to marry in a big family, where there would be tons of people – just like my home.

Then 15 happened ... I became a REBEL. I lived for a year in Belgium – which changed my view about Life in general... I wanted a party boy, who lived each day as it comes, didn’t expect too much out of me, simply put – i wanted someone who would come with me to my parties, wake up late with a hang-over, not call me for the entire day, have no emotional bonding with me, and probably join me straight at my next party ! Of course he has to be the heart of every party – I was pretty loud then, so someone who would scream with me from Bar-Tops !

Then 20 happened..where I became a REBEL SQUARE... I was then living in Dubai. I became NAUGHTY... and my views on having a BAD MAN intensified. Only this time I wanted a BAD MAN, so that I could TAME him. Let me put it this way. There is nothing called TAMING A MAN !! MEN, JUST LIKE WOMEN change only when they want to. So I became a BAD ASS GIRL, only to find out this time, no one wants a bad-ass girl.
Then I came to live with my parents. I turned 21 ! I became OLD. And each passing day wore off my funny ideas about my man ! Everything goes down-hill after 21. At least back then I knew what I wanted. At least the genre of my man was set. But from 21 , up until the present I have been confused.... SMART v/s GEEKY... GOOD LOOKING v/s GOOD HEART... LOADED v/s HARD WORKING... BIG CITY LIFE v/s SIMPLE TOWN... LENSES v/s SPECS... TALL v/s Just about MY HEIGHT... DARK v/s FAIR... PRETTY EYES v/s one who calls me PRETTY EYES... !!! URGH ... !!! The list goes on...

But These people have found THEIR ONE ! HOW ? How did you decide ? When did you know ? What was it that changed your mind ? Are they anything like your EX ? What are your expectations ? When you have wanted so many things, does your “THE ONE” check into 90 % of your list ? These are questions I ask myself each time !
But I know you guys are made for each other ... I see the twinkle in Payal’s eyes when Akshay winks at her from the stage or I see Juhi gloat in pride when without asking Vikram gets her “HER FAVOURITE” drink... When I see my parents who have been together for 27 years now, I cannot help but wonder... Do they ever get tired of loving each other ?
Posted by Disha Doshi Shah