D for DIET and D for DOMINOES ! 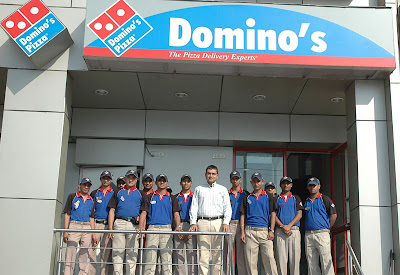 D for DIET and D for Dominoes !!! Not the best combination ever. And just when I thought that I am in LINE with my DIET – Bazooom…. On my way to office last week I see a Dominoes is now Hiring sign !!! What !!! This can’t be the location – I said to myself. There was a dingy BAR that old men sat at and drank post work. But my worst fears or should I dare say my wildest dreams came true… DOMINOES was opening at that very location.

Strategically placed in the beginning of the only lane that I have to pass twice a day - once to enter office and once at close of day – DOMINOES was going to haunt me !! This week – up until yesterday I was adamant of not looking at it. I had also mentally prepared myself to look the other way at the fat man sitting in the Lucas Electronics store right opposite to DOMINOES new location at Saki Naka.

But yesterday as My sister Dhwani Doshi and I passed it on our way out – we made the store manager promise that He has to , has to has to make us NO 1 customer !!! We were adamant that the store should make their first sales to US. A matter of prestige for someone like me who has been a big fan of Mexican Green Chillies, Medium Size Thin Crust and the Choco Lava Cake – both from the time they have started !!!

So today on my way in – I made sure the ever similing area manager was sticking to his promise. I even made him give me a missed call on my phone, so that I could check on Dominoes whenever I wanted !! And there at 3 30 – I get the much awaited Phonecall.

DOMINOES was not only wanting me to become their first customer – but they also wanted me to OPEN THE STORE !!! WHOAAA… I was officially their chief guest and was to cut the ribbion and cake et all !!! MAJJHAA AA GAYA !!! 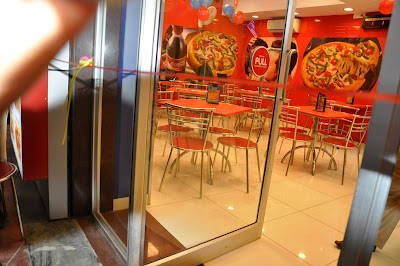 So while the 30 off DOMINOES MEN AND WOMEN dressed in Blue cheered, I cut the RIBBON. Had I known I was to do something so major today – I would have dressed in my best and put on some make up !!! God – when will I ever learn ??? 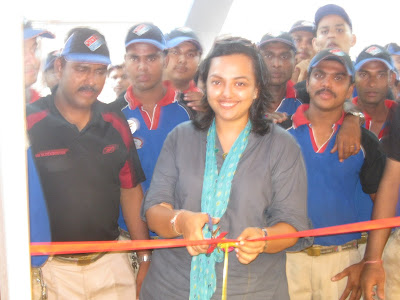 Anyway – So, I did… and made the MAHURAT ORDER of my favourites. Then the store managers – the smiley, helpful ones took me inside – showed me the kitchen—it is mighty small I tell you !! Can you believe they churn so many pizza’s in that much space. Or atleast I am hoping they will amazingly well, now that I have opened the STORE !! 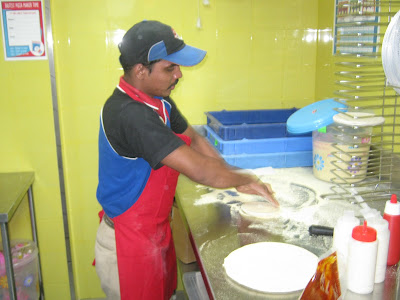 My Dad was fortunately there at the Andheri Office – so I tagged him there.. It was an event to remember… : )) He tried taking a few pictures – but his photographing skills go to the dogs without his 50+ reading glasses. We enjoyed the freshly baked Pizza with the smeltering cheese !! And then the lava oozing out of the cake and came back as happy bunnies fluttering the NO 1 Customer Receipt that my Sister DHWANI DOSHI was dieing to have !!! 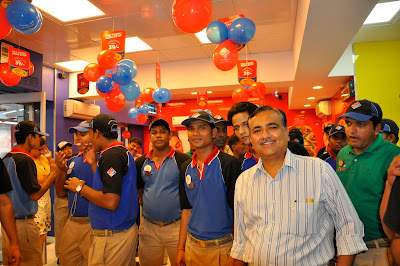