SHUT UP and VOTE 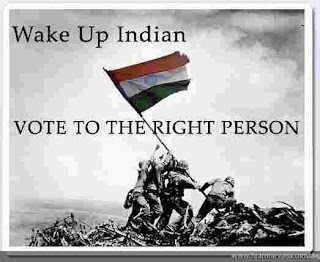 SHUT UP AND VOTE !!! This seemed to be the song of the month, just about anywhere and everywhere that I went. In my college campus, the cafe’s and the bars, on TV, facebook status ! Even my favourite celebrities were trying to preach to me to VOTE. VOTE VOTE VOTE.Look what happened when America voted ! The black inedible ink looks horrendous on my middle finger, but somehow the entire feeling of VOTING made me feel responsible. It gave me the power to legitimize all those times I grumbled about a non-functional government. It’s a slow afternoon on a national Holiday – V Day as they like to call it. I switched on the live coverage of the campaign. The numbers were coming in – only 47 % of the complaining, whining, angry post any national terror calamity of the population turned up to vote. 10 crore rupees of the “Jagore” campaign gone down the drain !

For the sake of this blog I would like to discuss what was going through my mind when I chose to vote. I believe I represent the young Indian voter ! And if any politician had to read my blog today, he could use this to formulate his future action plans for the next 4 years ! The best I have seen anyone describe India is Shashi Tharoor. “India is a thali, a selection of sumptuous dishes in different bowls. Each tastes different and does not necessarily mix with the next, but they belong together on the same plate, and they complement each other in making the meal a satisfying repast.” So there may be different views by different people, but this is MY BLOG !! So SHUT UP AND READ !

Who I voted for, I wouldn’t tell It’s a criminal offense. Who you should vote for is not my prerogative. I only wish to outline my though process while I was voting.

The 1st debate in my mind : The bread versus freedom debate.
Can democracy deliver us the goods ? to alleviate desperate poverty, or do its inbuilt inefficiencies only slower the rapid growth? Is the instability of makeshift coalitions a luxury that developing country cannot afford? So while most of the 57 % of people not turn to vote – were they considering political freedom a dispensable distraction?

2nd debate : The centralization versus federalism debate.
Does tomorrow’s India need to be run by a strong central government to be able to transcend the superficial tendencies of language , caste, and region, or is it that government best which centralizes least? Can other states not pull a MODI ? Can’t strong ethical organisations like the TATA’s launch more campaigns to move the rest of the 53 % to vote ?

3rd debate : Pluralism versus fundamentalism debate.
Is the secularism established in India’s constitution and now increasingly attacked as a westernized affection, essential in a pluralist society, or should India, like many other 3rd world countries, find refuge in the assertion of its own religious identity? Look what it did to Pakistan ! One cannot tell when it is going to topple over. Now i am not one to follow Politics so widely, but I am always uncertain... I only hear different names of the RULERS each day.

And the last debate – The coca-colonization debate , or globalisation versus self reliance.
Should political parties make globalisation their agenda or non-agenda, and sing praises of India, where economic self sufficiency has been a mantra for more than 6 decades. Is there a reason for them to even debate if India should open itself FURTHER to the world economy, or worry if the entry of western consumer goods bring in alien influences that threaten to disrupt Indian society in ways too vital to be allowed? I am a girl, I want to receive cards and gifts all in RED HEART SHAPES each day of my living life without having to think who is waiting at the corner to bash me up. Should they even think of raising the barriers to shield the youth from the pernicious seduction of MTV and McDOnalds? Being nationalistic is my thing, doesn’t matter which language I express it in ! Why can I not express myself in English? I want to boast about India to all my friends living abroad, how will I ever be able to communicate if I don’t speak English ?

Is this the India I want my children to inherit? After having discussed this with my father, he seemed to be of the same opinion about 25 years ago, when he set out to vote! The only difference is that now he votes for the lesser evil of the lot rather that rationalizing his decision making. Maybe I didn’t vote for any party, because none of the parties agenda’s matched my agenda – to see where MY INDIA stands ! Maybe I put in a blank vote ! You will never know... I wish everyone knew their part and they had SHUT UP and VOTED !!!
Posted by Disha Doshi Shah