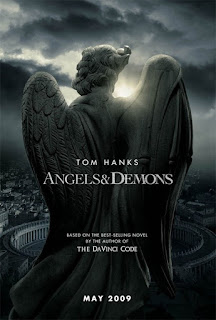 There are 10,000 books written every day but only 10,000 movies made in a year. It’s difficult to write books but the task of making that book into a movie is that compared to climbing the mount Everest. First, you have the die-hard fans of reading – like me, who pledge at first that the book is way better and the movie will not do justice, then you have the other kind of people who don’t read the book and end up watching the movie and not understanding it and writing it off, so the risk taken is huge.

After having coaxed my friends into going and watching the film with me, I had mentally prepared myself for some “Are you crazy looks !” But “Angels and Demons” holds a niche position in one kind of movie watching FIESTA. I could not let my mind wander while watching it and still follow the tangled intricacies of Robert Langdon’s fascinating professors tour of Rome and simultaneously, I really wanted my mind to wander to think of all those beautiful real life sets.. Ancient Rome, Vatican City, Sistine Chapel. It was a feast to the eyes to see all these live on screen in a teeth wrenching story line so crisply defined. So “Angels And Demons”, as directed by Ron Howard and starring Tom Hanks definitely has some interesting things to offer. It obviously has Tom Hanks, who is always a pleasure to watch.
Dan Brown is a writer of great success who can really write a synopsis. Dan Brown has to be given credit for bringing together some fascinating real and probably unreal legends and lore. Brown’s plot required that the Director jams in a lot of chatty detail into Angels and Demons. Much of the detail is interesting.

Modern movie goers like my friends who I sat with and maybe even me have lost the ability to listen to a movie these days. So every time I decided to explain the on-goings to my friend someone cried SHHHHHH .... We want to watch but not to concentrate. While Angels and Demons moves along better than the movie adaptation of Dan Brown’s The Da Vinci Code did, there is a minimum of detail required to understand the history and story. Tom Hanks talks pretty fast but this is not a narrative you can skim through.

Center to the intrigue in Angels is the ancient battle between the Catholic Church and the maybe mythical organization called the Illuminati. The Illuminati was formed from scientists and scholars who were driven underground hundreds of years ago when science wasn’t nearly as cool as it is today. Science and progress is always a threat to institutions that run on ritual and so many scientists, including the astronomer Galileo, were either forced to rethink their views or were outright murdered.

So the Illuminati are pretty unhappy and bring their grudge to modern day Rome where they apparently want to get even quick with a bomb made of really geeky antimater, stolen from the Large Hadron Collider.The Vatican and the city of Rome are really fascinating places. They are jammed packed with unbelievably beautiful churches and castles and also of dark and hidden places, secret passages, skull lined floors and thousands of years of real mystery. Rome and the Vatican are so over the top magnificent and creepy that the secret society of the Illuminati and their ancient beef with the Church seem no less plausible than that man could build a city so full of images and structures of beauty and death.

Robert Langdon has a trail of clues to follow and very little time to follow them. We get to know a ton of Vatican rules and regulations. Latin is thrown around as if by itself it can fill the holes in the plot.

Angels and Demons commits the gross movie sin of having the plot and characters ultimately not honestly landing where they were aimed. There’s twist for twists sake. While watching Angels and Demons, I could feel that there was a twist coming. It was plainly apparent. Because of this, I could not take the characters in the movie at face value as they were portrayed, with the exception of Tom Hank’s Robert Langdon, who must remain a pillar of truth for anything to work. Angels and Demons – THE MOVIE finished telling the more than interesting story that it had set out to tell and joined the league of A Beautiful Mind, The Kite Runner, The Namesake in my list of brilliantly adapted books in modern times.
Posted by Disha Doshi Shah