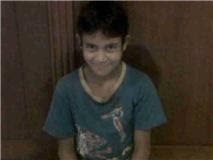 “We have finally got a boy !” my mother squeaked into the phone. I would have been sad to find out that I will be now sharing my inheritance with 3 other people than the 2 already on the list. But I was happy – this boy was going to put an end to the riots in my house. A house-boy who will run around the house helping my mother in the kitchen, washing utensils, dusting the ever increasing memorabilia’s from our different trips etc. This one boy has to power to put my mother out of domestic misery. He was going to be our new house help.

A friend of a friend of a friend had suggested this little boy of 15 from Nepal who was going to come in. Of course the only reference was that this little boy’s Mama works in this friend’s house. And this boy is 4 days old in Mumbai. The common friend was going to drop him of at our house. So we prepped his bedding, his pillow and a few basics ready so that he instantly feels welcome and likes our home and agrees to serve us till the end of time. At 4, I go down to fetch him. At first I can only see the Aunty driving the car with an empty back-seat. I was surprised she had come alone. Then when the car stopped a little boy no taller than 4 feet something jumped out of the car. “aunty, I thought you said he was 15. This boy looks like he is 10” I screamed at her. I was surprised and dumb founded at this little thing waiting with one plastic bag in his hand. “He says he is 16, his mama claims he is 15 ! What do I do ?” She left him in my care and drove away.

While waiting for the lift I suddenly realised he had just 1 plastic bag. Upon enquiring I found out that there is nothing but a pair of clothes inside. And that is it. This shabby looking Nepali boy had nothing but 2 pairs of clothes and rubber slippers. He looked weak – but he put on a tough exterior. “Mein Shab Kuch Kar Leta Hoon” he said in his cute nepali accent – and that’s the only thing he knew how to say in correct Hindi. When the lift came, this little being got scared. Hesitated a moment and then ran inside. It was probably one of his first times he has ridden a lift.

Once in the house I gave him tea, glucose biscuits and some hot snacks. While he ate I asked my neighbour to send her little child’s olds clothes. Then I sent him inside the shower but this little Sherpa looked at me. He did not know how to run the shower. So I showed him his way through all the knobs. Since he didn’t have anything, I took out New Toothbrush, paste, a bar of soap, some powder, a comb, a towel – the basics. He lacked THE BASICS !

While He showered and got dressed my mother made quick calls back of forth enquiring with my father what to do. My father put his foot down – “This boy will not stay in my house ! He is too small. It is not only a criminal offense, but a social one !” He screamt down the line for my mother to return him back through the link. It was when we were telephoning and devising a plan this little boy emerges out all clean and freshened up and announced to us that he had not only showered but also finished clearing all the vessels in the kitchen. It was spic and span.

This little cherry coloured eyed boy of Nepal was the eldest of the 6 siblings. His father has 2 wives. He lives in a small town called Dotti far away from Kathmandu. It’s a shame that we knew only one town of this country and asked him directions from there. We enquired about his family and how he had come to India, managed passed the borders etc? It is a real surprise how we get rejected VISA’s and they just waltz into our majestic country. Of course by waltzing in I meant that he had taken a BUS which travelled for days before he boarded a train from Mathura. From where he came to Mumbai. How on earth did a BUS go un-noticed on Borders? He said he had a BAJJI which is basically a piece of paper from which we could read nothing which allowed him in.

It was probably a lie he was asked to tell by his mama. He had probably travelled on a BUS to the border, then crossed it on foot as he was trying to brush away the topic of how he got here. But he is all but 10 years old. And their innocence is often reflected on their faces. But this boy is brave. I remember being away from my parents when I was 21 for just 7 months and I had cried my heart out at the airport. And here there was this 10 year old bravely telling us stations and routes.
Finally night came. And my mother asked him to sleep alone. My brother who is 18 still runs into my parents room when he had bad dreams. Where is this child going to run ? What will he do when he is scared to death ? Why is he in Mumbai, when actually he should be cattle grazing his family herd in the mountains of Nepal ? He had never slept under a fan – and thus asked me to turn it off. The A/c throughout the day had given him a cold. I gave him child cough medicine which soundly put him to sleep.

This morning when I woke up at 6 30, this little boy was up. He had bathed already and was folding his blanket and bedding neatly onto the pile. I was surprised that he was even up. We fed him breakfast and then returned him back – fully knowing that if not us, some other heartless person will hire him to put of their misery – THIS IS MUMBAI.

We had a heated argument with our father. We wanted to keep him – because at least we know with us this little one will be safe. We had planned that we would not make him do any work. We would just let him live till he turned of a certain age. Send him to street school just outside our house. But my father was adamant. “We cannot keep anyone illegal” he said. He was right. But we were right too.

This little boy had no idea why we had provided him with everything only to reject him and let him go. We all cried. Some silently and others literally. We felt helpless as he drove away.. My little Sherpa is going to be a street boy some day... Mumbai is his new home. He probably will never see his family or Nepal again. And all I can do about this is blog about it... and cry my heart out !
What do you think I should have done ?
Posted by Disha Doshi Shah