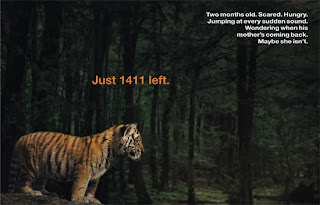 I wake up one morning to see M.S.Dhoni rant about there being only 1411 tigers left. Who cares right ? It’s sad and all, but what can you do ? Dinosaurs got extinct – the ape man didn’t do anything about it !! We no longer see the golden quocoi extinct somewhere in 1970’s. Each generation is responsible for letting go off one animal species. And 2009-10 – being our year, we will be responsible for making TIGERS EXTINCT ! When you live in the 21st century, all you think about is yourself – and I said to myself in consolation – Atleast I don’t make the hunting trips myself !! I don’t even eat MEAT – there you go , this is my contribution to saving our animals !!

But a quick call from a class-mate Akshay made me think ! Now Akshay and I may not be fast friends, so it was quite odd when he asked me what am I going to BLOG about next, that too 10 a.m this morning! He suggested SAVE TIGERS as a working title. Really ? Me ? Blog ? Tigers ? 5 hours after this phone call, I thought I should at least Google it. I haven’t googled anything today ! So while the pages got loaded, flashes from the past appear before me. First memory has to be the hindi film villain’s house which will definitely have a stuffed tiger hanging on his wall … or the tiger skin forms a part of the mural on the wall. I also remembered my trip to Darjeeling a decade and a half ago. And I remembered asking my mother why isn’t Rani( the tiger’s name was Rani ) roaring ? The Darjeeling tiger reserve had one ailing tiger who they didn’t know how to cure. And she has been a gift from some government to India when the reserve was being made. She was soon going to be moved out of there – because she was so sick and refused to show any signs of recovery.

This is reason enough ! So I first set about getting my tiger facts straight !

•2009 was the worst year for tigers in India, with 86 deaths reported.

•There are 37 Tiger sanctuaries in India. However, 17 sanctuaries are on the verge of losing their tiger population.

Now it hit me !! 1411 tigers, Really !! 10 pages of Google with 10 entries per page all were talking about saving the TIGER. I like to believe Akshay thought I was the one person who could use my blog as a medium to write about saving our national animal. And even if I have just written SAVE OUR TIGER – This would be awareness enough .. !! So I’d like to take moment to thank Akshay for making me commit to this cause. And through this blog I wish a few more of my folks to commit to this cause themselves.

The objectives are to:
•Protect, restore corridors to ensure connectivity between tiger habitats while ensuring that human-tiger conflicts are reduced.

•Create incentives for local communities as well as state and regional government and opinion-makers to support tiger conservation.

•Enhance capacities of the Forest Department to control poaching of tigers and prey species.

•Provide policy inputs at state and central levels to ensure effective measures for conservation of tigers and their habitats.

•Promote the political will as well as popular support within all sectors of society for tiger conservation.

So, I get onto the AIRCEL Initiative website – What can be done ? It asked me to write about it – to spread the message for people to read. TIGERS ARE REALLY ON THE BRINK OF EXTINCTION PEOPLE !! And it’s a scary thought. How will our next generation ever relate to the Jungle Book ? Will SHER KHAN never be the villain ? Will books have to be amended for our national animal for 40 something years is just a mere fragment of our imagination ?

The second initiative is to make some contribution to institutions like WWF Etc. Who have been proactively working for this cause.

I for one am going to make it a point to visit one of these Wild Life Reserves on my next trip out. And be a responsible tourist ! I want to go and experience the wilderness without disturbing the tiger habitats !! The reason why these tigers are also depleting in numbers is because these forest reserves don’t have as many tourists that come in, which means lesser revenues, which means lesser money is spent on the up-keep of these reserves. They just missed the point, that they were made for these tigers in the first place ! I have done my bit ! Now it’s your turn.. Come join me LET’s BE RESPONSIBLE TOURISTS, let’s plan a trip to the reserve. It may be our last chance to see these beautiful animals.