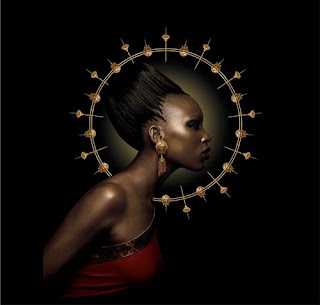 “She was a child of the desert. She was as tenacious and as beautiful as the flower that grows there after the rain.” I first read about Waris Dirie when I was researching for my final year project with the Trinity College of London effective communications exam. I wanted a subject that will not only touch the heart of my examiner but something so strong that she will take it back with her. Her story needs to be told. Her story needs to be listened to… When terrorist kill – they kill the human being… When your own people kill you, they kill your SOUL !!

Waris Dirie is from Somalia, where Poverty roars unforgiving amongst the vast desert. Her family was a tribe of herdsmen in the Somalian desert. And as a child, the freedom she had to experience nature’s sights, sounds and smells was pure joy. They would watch lions baking in the sun. They ran with giraffes, zebras and foxes. They chased hyraxes—rabbit-size animals—through the sand. They were happy. Gradually, those happy times disappeared. Life became harder. By five she knew what it was to be an African woman, to live with terrible suffering in a passive, helpless manner.

In a nomadic culture like the one Waris was raised in, there is no place for an unmarried woman, so mothers feel it is their duty to ensure their daughters have the best possible opportunity to get a husband. And since the prevailing wisdom in Somalia is that there are bad things between a girl's legs, a woman is considered dirty, oversexed and unmarriageable unless those parts--the clitoris, the labia minora, and most of the labia majora-are removed. Then the wound is stitched shut, leaving only a small opening and a scar where the genitals had been-a practice called infibulations. Paying the gypsy woman for this circumcision is one of the greatest expenses a household will undergo, but is considered a good investment. Without it the daughters will not make it onto the marriage market.

The actual details of the ritual cutting are never explained to the girls-it's a mystery. You just know that something special is going to happen when your time comes. As a result, all young girls in Somalia anxiously await the ceremony that will mark their becoming a woman. Originally the process occurred when the girls reached puberty, but through time it has been performed on younger and younger girls.

On the day of the circumcision Waris peered between her legs and saw a gypsy asking her to sit on a rock outside her house. The old woman looked at her sternly, a dead look in her eyes, then foraged through an old carpet-bag. She reached inside with her long fingers and fished out a broken razor blade. Waris saw dried blood on the jagged edge. She spit on it and wiped it on her dress. While she was scrubbing, Waris world went dark . The next thing she felt was her flesh being cut away. She heard the blade sawing back and forth through her skin. She says that the feeling was indescribable. She didn't move, telling herself the more she did, the longer the torture would take. Unfortunately, her legs began to quiver and shake uncontrollably of their own accord, and she prayed, Please, God, to let it be over quickly. Soon it was, because she passed out.

When she woke up, her blindfold was off and she saw the gypsy woman had piled a stack of thorns from an acacia tree next to her. She used these to puncture holes in her skin, then poked a strong white thread through the holes to sew her up. Her legs were completely numb, but the pain between them was so intense that she wished she would die.

Her memory ends at that instant, until she opened her eyes and the woman was gone. Her legs had been tied together with strips of cloth binding her from her ankles to her hips so she couldn't move. She turned her head toward the rock; it was drenched with blood as if an animal had been slaughtered there. Pieces of her flesh lay on top, drying in the sun. Waves of heat beat down on her face, until her mother and older sister, Aman, dragged her into the shade of a bush while they finished making a shelter for her. This was the tradition; a little hut was prepared under a tree, where she would rest and recuperate alone for the next few weeks.

Waris’ story is one in a million. She is a miracle child. Many girls die from bleeding to death, shock, infection or tetanus. Considering the conditions in which the procedure is performed, it's surprising that any of them survive. Those who survive live to feel the pain each day. Soon after that Waris ran away from her home and made it to Mogadishu from where she fled to London. A chance encounter with a photographer called Mike changed her world. She was introduced to the world of Fashion ! She appeared in a Revlon commercial with Cindy Crawford, Claudia Schiffer and Lauren Hutton. These projects kept snowballing, and soon she was in the big fashion magazines: Elle, Glamour, Italian Vogue, and British and American Vogue.
In 1995 the BBC made a documentary about her life as a supermodel. In 1997 the United Nations Population Fund invited her to join its fight to stop female circumcision, or female genital mutilation (FGM), as it is more aptly called today. The World Health Organization has compiled some truly terrifying statistics that put the extent of the problem in perspective.

After I saw those numbers, it became clear to me that this wasn't just A WARIS DIRIE problem. FGM is practiced predominantly in Africa-in 28 countries. Now cases have been reported among girls and women in the United States and Europe, where there are large number of African immigrants. This practice has been performed on as many as 130 million girls and women worldwide. At least two million girls are at risk each year of being the next victims-that's 6000 a day.
This story needs to be told. You need to be aware !!
Posted by Disha Doshi Shah