Istanbul: a mash-up of East and West

Istanbul: a mash-up of East and West that vibrates to the rhythm of techno Sufi drums and daily prayers. The city is an expanse of neighborhoods’ that stretches across the tips of Europe and Asia and – even while supporting a population of about 20 million (not all documented) The red bus guided tours had some different numbers to what the tourist guide had to tell us – it has managed to organically unearth itself amongst the hills inbetween the Marmara and Black Seas. Despite this city’s green serenity, the locals carry the age old conflict of East and West within, something clearly visible when one compares the old city surroundings and the chic neighbourhood of Ortakay.

Thankfully for the traveller, no one in Istanbul is willing to give up the time-honoured legacy of Turkish hospitality from their lost empire. So while the workday moves at a snail’s pace between tea breaks and nargile puffs, the nights are packed with an affable energy that threatens to sweep a visitor off their feet if they don’t mind their ‘ç’ and ‘ș’. Attention to the details of everything pleasurable: food, company and beauty is an essential part of Turkish culture. Istanbul residents’ commitment to this satisfaction of the senses seduces the nose with roasted hazelnuts and perfume, the eyes with the distorted colours of glass lamps, the heart with the salons of homes, and the imagination with the greenish blue eyes of that girl/guy sitting across from you at the cafe.


The historic Sultanahmet on one side of the Golden Horn, the fun European side of Beyoğlu and its many suburbs on the other and the Asian side divided from the rest of the city by the Bosphorus. All are fascinating and all have their own attractions.The most important thing to do when planning a trip to Istanbul is to allow enough time to explore. Too much to see and too little time is a common catch cry from those returning after a visit to this wonderful city.


1.The Topkapi Palace
The palace was the home of the Ottoman sultans during the 15th to 19th centuries. Four courtyards with beautiful gardens and fountains surround a multitude of buildings housing the Harem…a must see, we Walked to the end of the garden for a fabulous view over the Sea of Marmara.. all while enjoying a dollop of ice cream at the café to beat the heat. 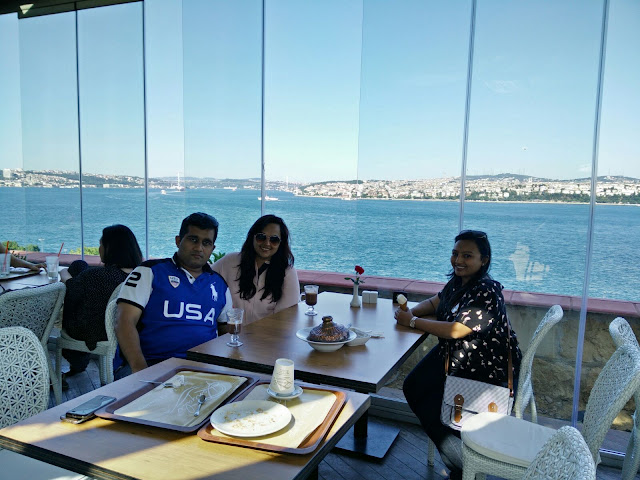 2. Aya Sofia or Hagia Sofia
Built in 537 as a Church, it later became a mosque in 1453 and finally, in 1935, a museum. You will be in awe of its beauty as you stand under the dome taking it all in. Take the steps to the gallery where stunning mosaics dating back to the 12th century can be seen. As one of the most beautiful buildings in Istanbul it is a sight that shouldn’t be missed! 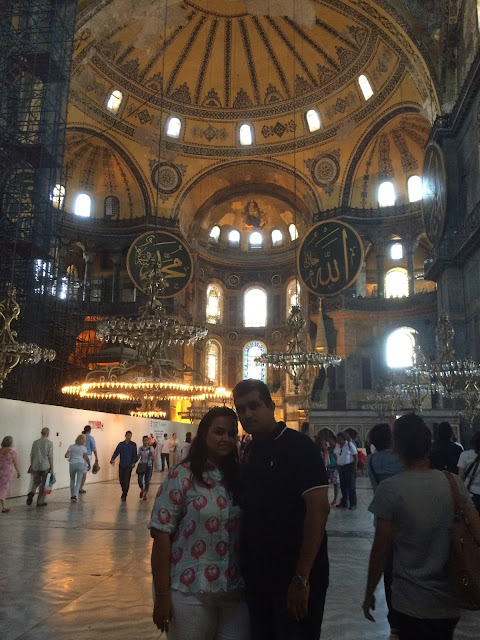 3. Sultanahmet Imperial Mosque or Blue Mosque
Across Sultanahmet Square facing Aya Sofia stands the city’s main Mosque with its six minarets. It is known affectionately as the Blue Mosque because of the blue Iznik tiles that decorated the walls. You need to make sure you are suitable clothed to enter this mosque. But worry not, they will further cover you up anyway. 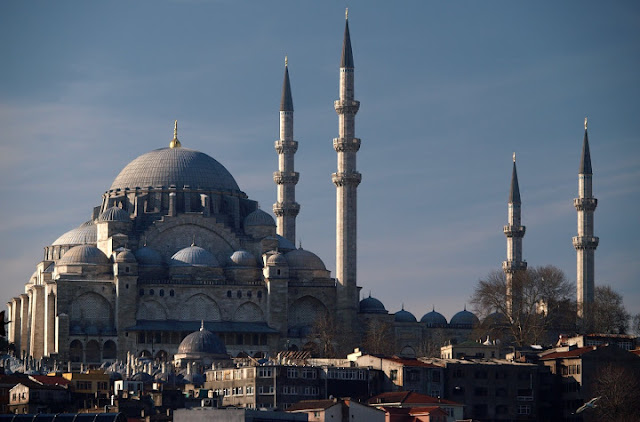 4. Hippodrome
You will have probably walked over the Hippodrome without realising that this was once the scene of chariot races and the centre of Byzantine life. Three statues still remain here. The Museum of Turkish and Islamic Arts also overlooks the Hippodrome. 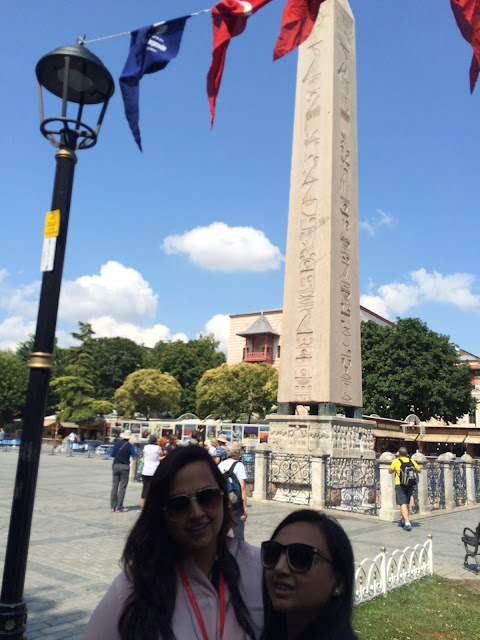 5. Kalpali Çarsi or Grand Bazaar
I can guarantee you will get lost in the maze of streets and passages that is the Grand Bazaar. Each trade is congregated in its own area: carpet sellers in one street, goldsmiths in another. There are some good buys on the leather street whilst the arts and crafts, ceramics and brassware areas may also tempt you. You’ll need a rest at some stage so pop into the Fez Cafe in the centre of the old part of the market for beautifully served refreshments and to plan your next stop. Despite many warnings from everyone who has ever been to Turkey, We got lured into buyinh Turkish tea. With Love tea that looks like pot pourri and Apple Tea which tastes like heaven, do you blame me ? 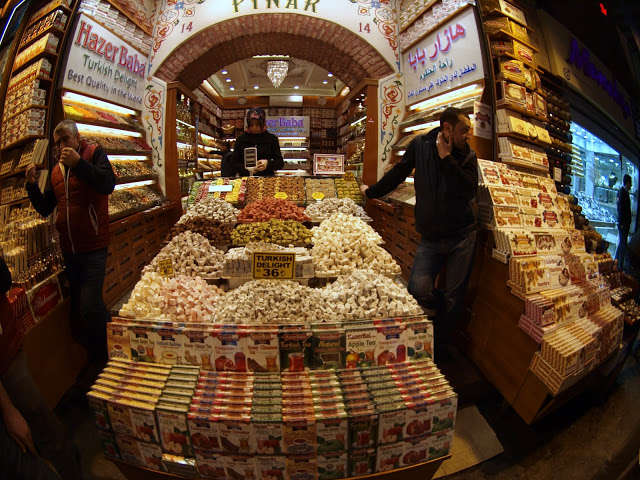 6. Galata Bridge
Fishermen line both sides of Galata Bridge day and night. On the level below you’ll find a wide range of fish restaurants. As you walk from the Eminönü, the Galata Tower rises like a beacon. Walk up the Camondo Steps, or take the street that leads you pass the music shops. The historic funicular that runs from Karaköy to Tünel may just be the answer for those that do not like hills! 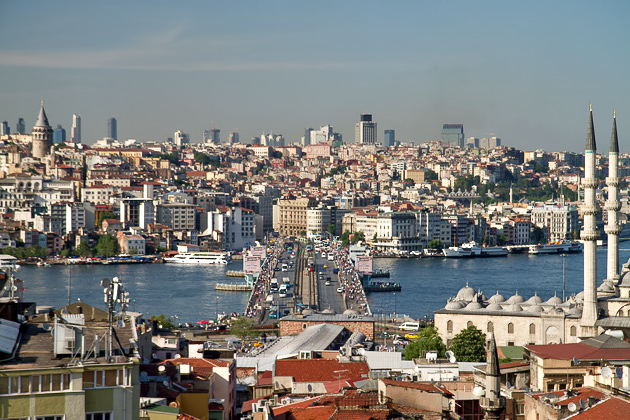 7. Walk the length of İstiklal Caddesi to Taksim.Keep walking up the hill from the Galata Tower and you will reach Istanbul’s famous pedestrian avenue, İstiklal Caddesi which you can take all the way to Taksim Square. If you don’t feel like walking, one of the famous historical red trams will be only too happy to take you! Explore the side streets that lead from here…there’s a whole new world waiting to be found! 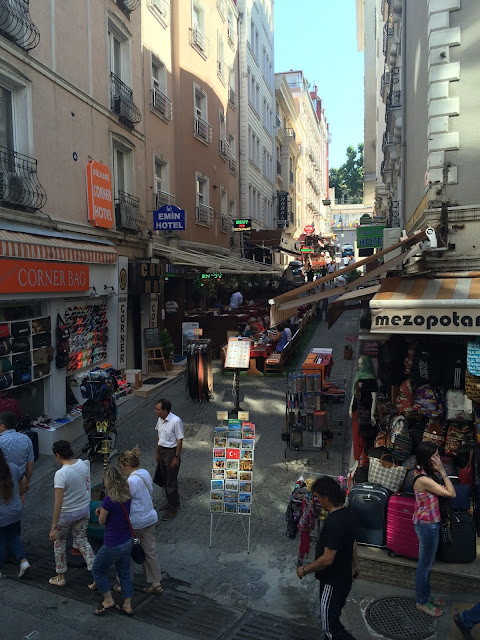 8. Smoke hookah. Argilah, nargile, sheesha, hubbly bubbly – whatever you call it, there is an ample supply of hookah bars in Istanbul where you can lounge around while you smoke the water pipe and sip on a class of tea or coffee.

If you’re walking from the Istanbul Modern to the Dolmabahçe Palace, keep a look out on the other side of the road for the painted steps that join Findikli to Cihanger (Cafe Nove is on the corner)
A local resident painted the stairs to brighten the area but two days later the council painted over them in boring grey! There was such an outcry that they were redone! There are now quite a few stairways in the area that have been painted. 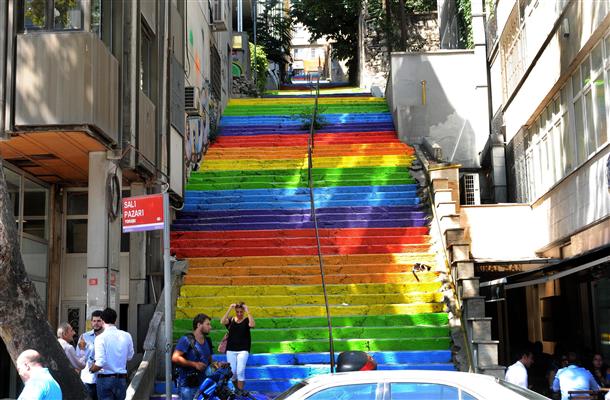 10. Taksim SquareTaksim Square, known as the heart of Istanbul, lies at one end of Istanbul’s famous Istiklal Cadessi. The Independence Monument, at the southern end of the square, commemorates Attaturk’s roles as military commander-in-chief and as a statesman. To the north, Cumhuriyet Caddesi takes you to Nisantasi. 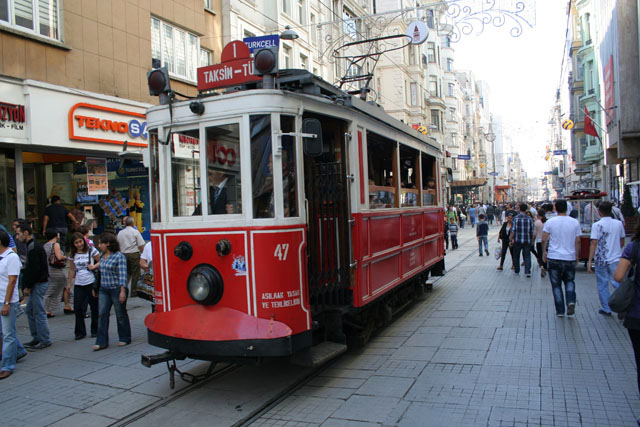 11. Nişantaşı
Nişantaşı is Istanbul’s most fashionable shopping and residential area. Besides great shopping, there are some interesting art galleries, fun cafes. Walk down Abdi İpekçi where you will find international labels including Prada, Cartier,Louis Vuitton and even Laduree! There are more cafes and shops on MimKemal Öke and Atiye Sokak

12. Drink Turkish Coffee
If you come to Istanbul you have to drink tea out of a tulip-shaped glass. Turkish tea is prepared in a rather unique way using a teapot that has two level: one to boil the water, and the other to brew the tea. You then pour the tea into the glass and dilute it with the hot water so that it’s made to your taste.

13. Roof top BarsWatching the sun set from one of Istanbul’s many roof top bars is a must! 360 is one such, pverlooking the golden horn is my favourite in Istiklal Caddesi. Just around the corne. 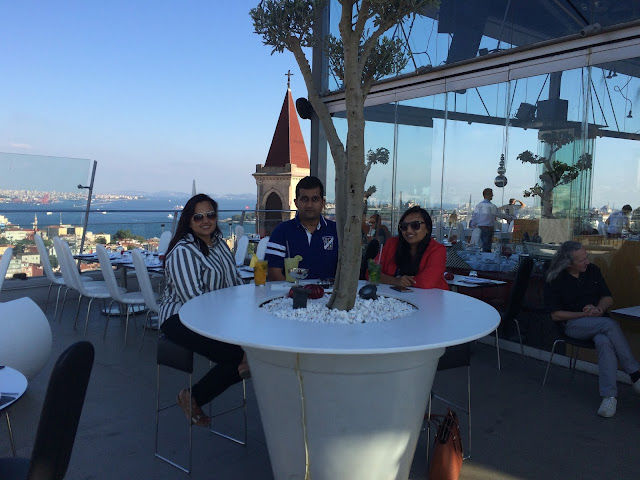 14. Last and by no means least….eat lots of Turkish food!Where to start…you’ve got to try it all! From the many fabulous bites offered on the street, to cheap and hearty meals to high end restaurants n clubs…Istanbul is a gourmet’s delight. Eat a sesame seed covered pretzel. You can pick up one of these tasty pretzels at any bakery in town, but I suggest you grab one from the little red stands along Istiklal Avenue. 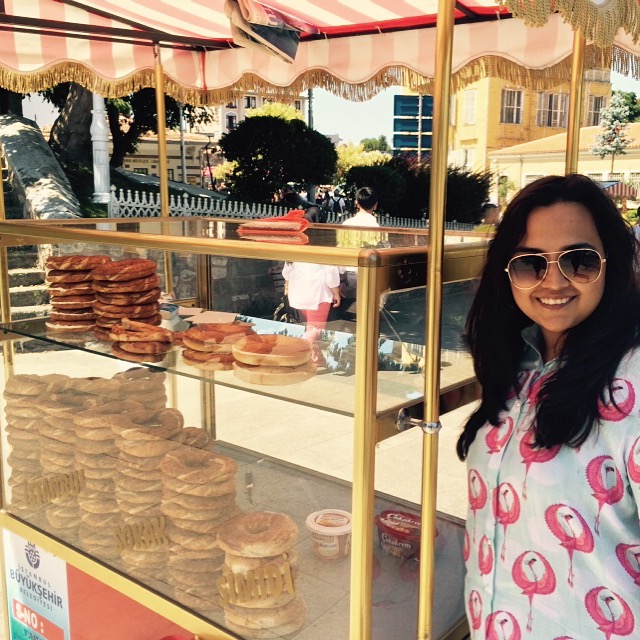 It just adds to the experience. Eat Turkish pizza. Lahmacun is considered to be the Turkish equivalent of pizza. This thin dough is topped with vegetables and herbs. Or a hearty portion of Kumpir,,, mashed baked potatoes with herbs cheese n vegetable salad !!! my heart yearns for it each time I think of it. 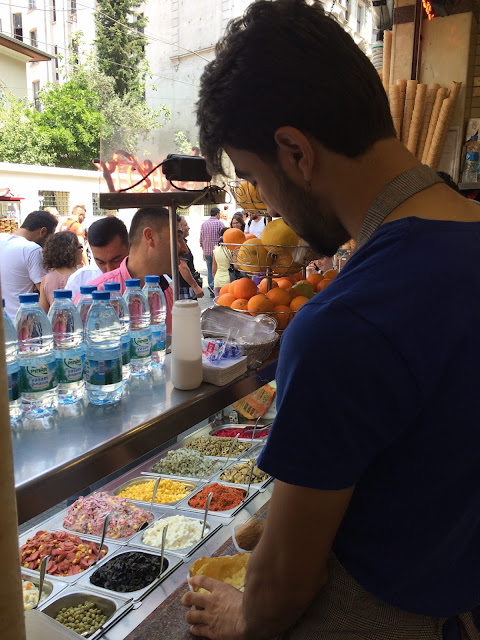 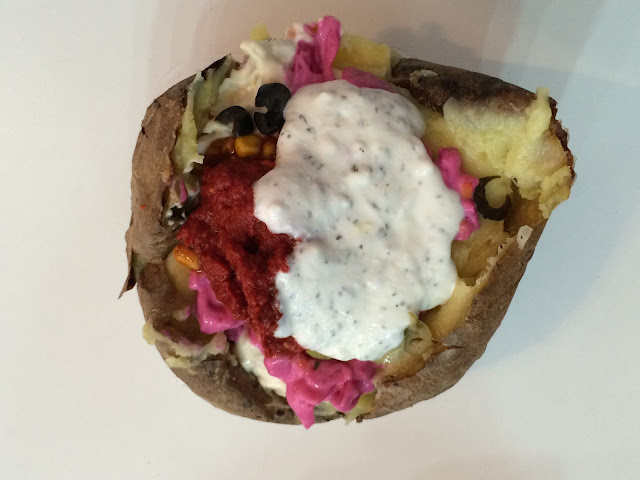 We went to some stunning restaurants .. REINA which later turns into a club is on the top of the list of every food blogger, tourist list, local list. And it has rightly earned its place there. I am yet to eat a better warm goat cheese salad which topples my senses like the one that did at Reina. Paired with some amazing wine I thoroughly enjoyed my Pizza too. We were later shifted to the club which played a mix of the best international hits. 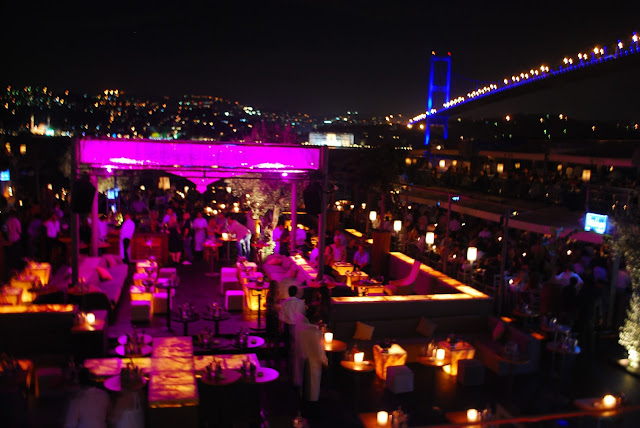 For a quite date night my husband Kunal and I would recommend Angelique on a weekday. A table by the bosphorous makes for a romantic setting, no ? 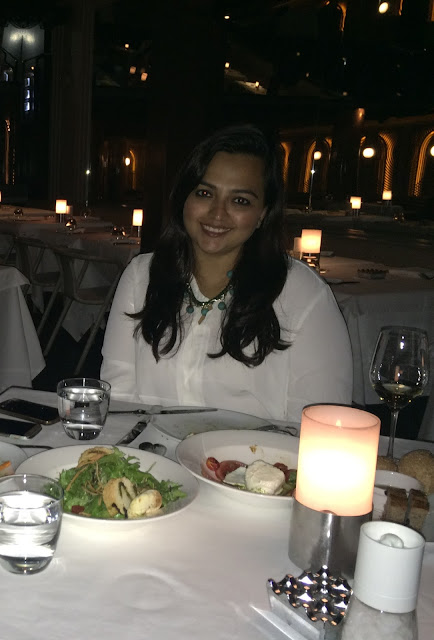 We also dined at Sortie – the club which boasts many restaurants, Cinquo per Cinquo being the Italian Fare.... with some amazing Cocktails ! 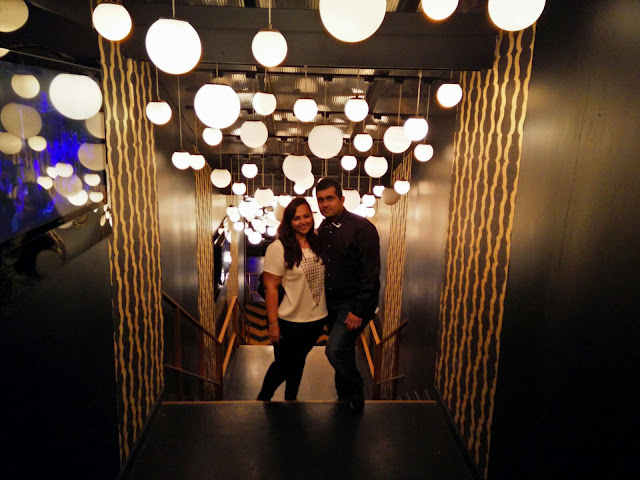 Ofcourse with all that fine dine, we kept lunches to street fares and an afternoon having some finger licking hummus and pita-falafel sandwiches at Falafel House ! Ask for a vegetarian menu and they will be happy and accommodating. 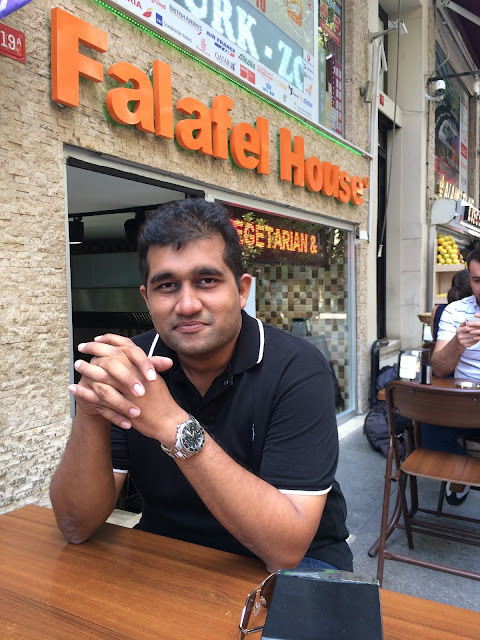 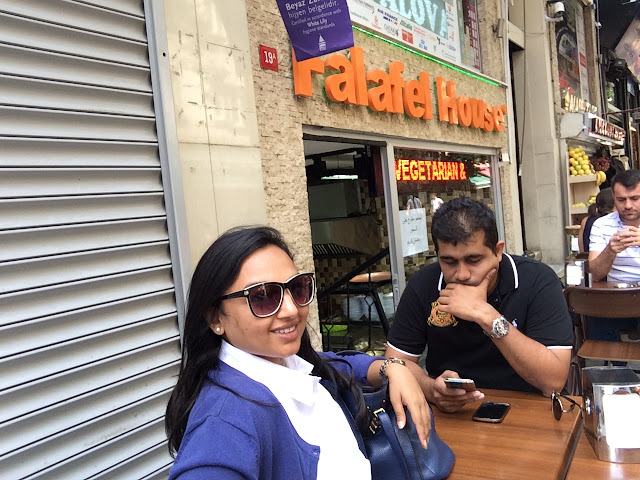 Have you been to Istanbul? Are there any places you think should be added to this list?If so, I’d love to read about them in the comments!
Posted by Disha Doshi Shah 3 comments: