Zambia beckoned me after 5 years … The country that made me my own person ! It was exciting for me especially because I went there with Kunal for the very first time … He had yet to see a little part of my life which remained in stories up until then.  Zambia’s capital of Lusaka deserves to be more than simply a pit stop or way station between national parks – its modernity as opposed to other African Nations and cosmopolitan mix of people offer a window to understanding the country as a whole. The city’s young and stylish hit the happening restaurants and clubs, many of which are in and around Manda Hill and Arcades Shopping Centre. While admittedly overwhelming to the senses, the city’s outdoor markets are worth experiencing to see how ordinary Lusakans do their everyday shopping.

Our First stop had to be in Chinika where we visited our factory … It was such a proud moment for me when everyone welcomed us !! They were happy to see me but I was happier seeing them.. 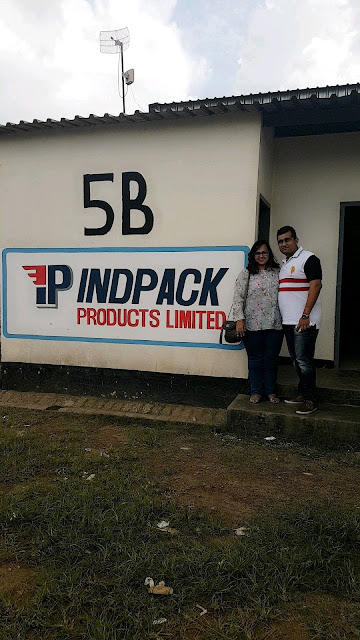 The rewards of travelling in Zambia are those of exploring remote, mesmerising wilderness as full of an astonishing diversity of wildlife as any part of Southern Africa. Adventures undertaken here will lead you deep into the bush where animals, both predators and prey, wander through unfenced camps, where night-time means swapping stories around the fire and where the human footprint is nowhere to be seen. Where one day you can canoe down a wide, placid river and the next raft through the raging rapids near world-famous Victoria Falls.

Though landlocked, three great rivers – the Kafue, the Luangwa and the Zambezi – flow through Zambia, defining both its geography and the rhythms of life for many of its people. For the independent traveller, however, Zambia is a logistical challenge, because of its sheer size, dilapidated road network and upmarket facilities. For those who do venture here, the relative lack of crowds means an even more satisfying journey.


We were lucky because my dad together with business friends had it all arranged for us. We hit the road on day 1 post factory visit instantly. We visited the Kafue temple which every Indian residing in Zambia is so very proud of. No trip is complete without a pit stop here !!

We continued on a beautiful ride up until Chinika border town and then a dilapilated road for the next hour to arrive at the Kiambi River Lodge ! There are lodges small and large each overlooking the Kiambi River ... Ours was beautiful ... The Lodge , Bar and Dining Area is constructed of natural materials: thatch, reeds and stone flooring with Rhodesian teak furnishings transporting us in Minutes for the whole Jungle Safari theme. 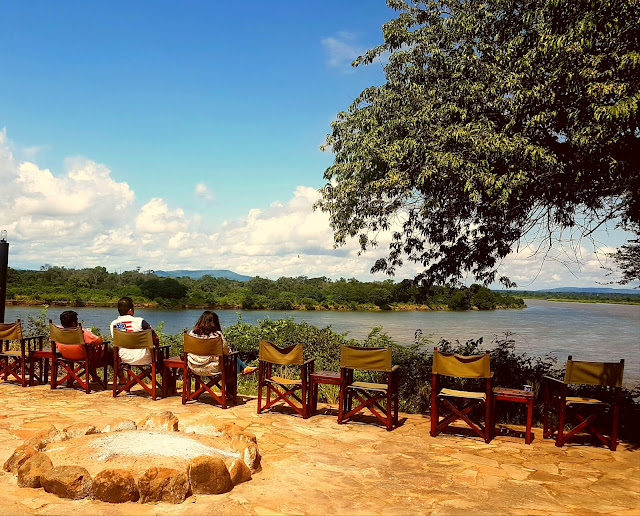 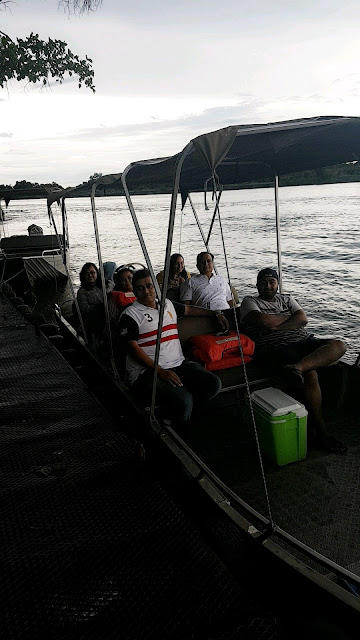 The setting along the banks of the Zambezi is incredible. Looking out at the elephants, cape buffalo and hippo's grazing on the islands…And those Carmine Bee Eaters look a Magical shade of red against the muddy banks !! 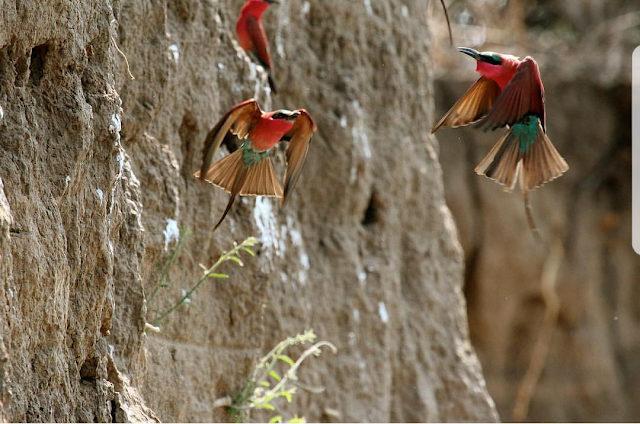 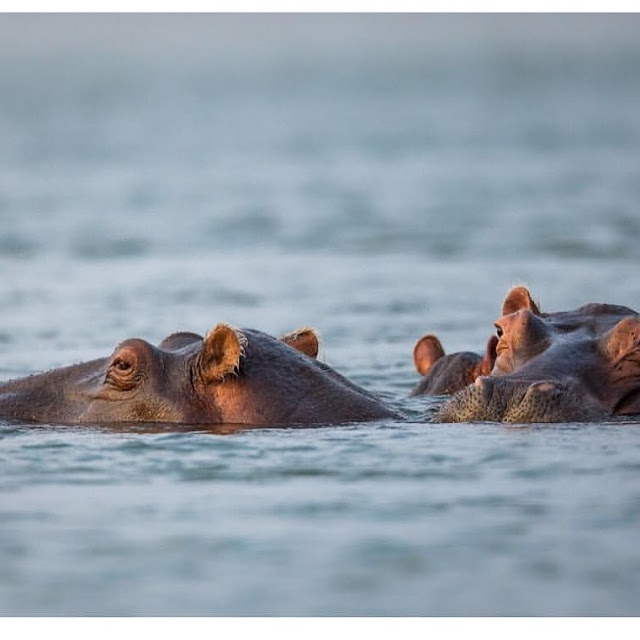 On our way back we stopped by a Banana plantation. A quick chat with the workers on the Plantation revealed there is so much more to this produce than what meets the eye. Science, Cold Storage and an advanced knowledge of irrigation system has made exporting Bananas so much easier. We plucked and ate one right from the bunch and enjoyed its sweet taste …. Oh Mother Nature !! 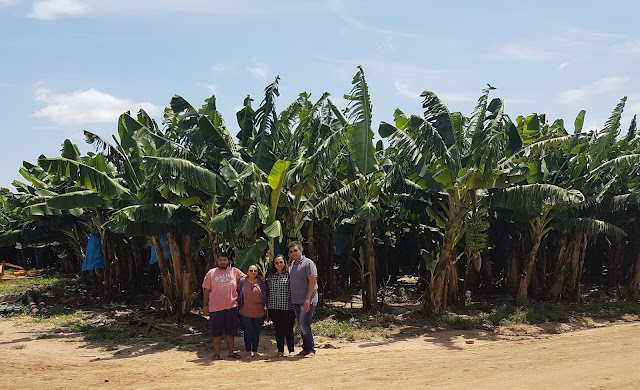 We returned to Lusaka for the night and immediately hit the Pro-Flight Tarmac to South Luangwa National Park… if you are a group of 12 it maybe just over 30$ extra per person to charter a flight. For scenery, variety and density of animals, South Luangwa is the best park in Zambia and one of the most majestic in Africa. Impalas, pukus, waterbucks, giraffes and buffaloes wander on the wide-open plains; leopards, of which there are many in the park, hunt in the dense woodlands; herds of elephants wade through the marshes; and hippos munch serenely on Nile cabbage in the Luangwa River. 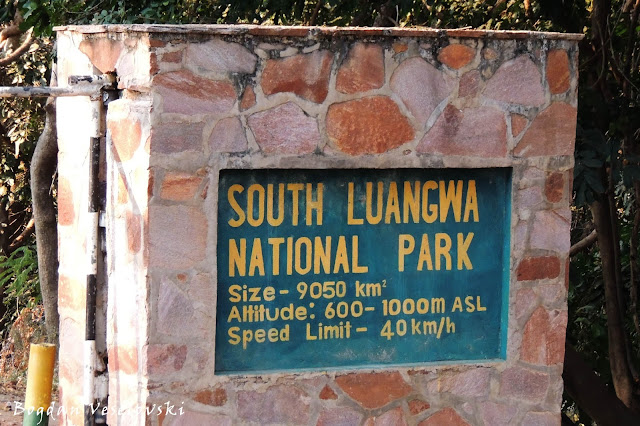 The bird life is also tremendous: about 400 species have been recorded.The focal point is Mfuwe, an uninspiring though more prosperous than average village with shops as well as a petrol station and market.  We were picked up at the Mfuwe Air Strip , you cant really call it an airport ! On Our way we gave a lift to a herd  of chattering school going girls who sang local as well as Bollywood songs thanks to Zee Channels penetration ... 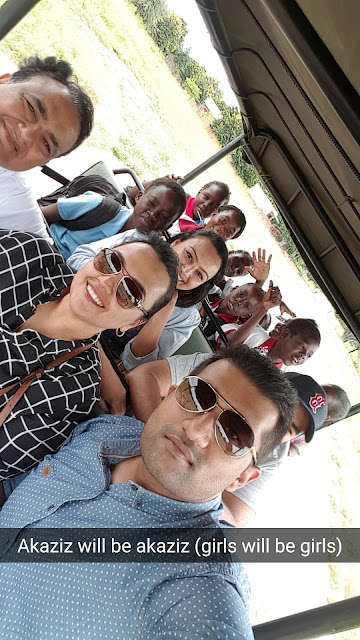 Around 1.8km further along is Mfuwe Gate, the main entrance to the park, where a bridge crosses the Luangwa River. Much of the park is inaccessible because of rains between November and April.
We stayed at Mushroom Lodge … which looked like our second home because my mother and sister ran a vegetarian cooking lesson for the staff through all the days we stayed there. 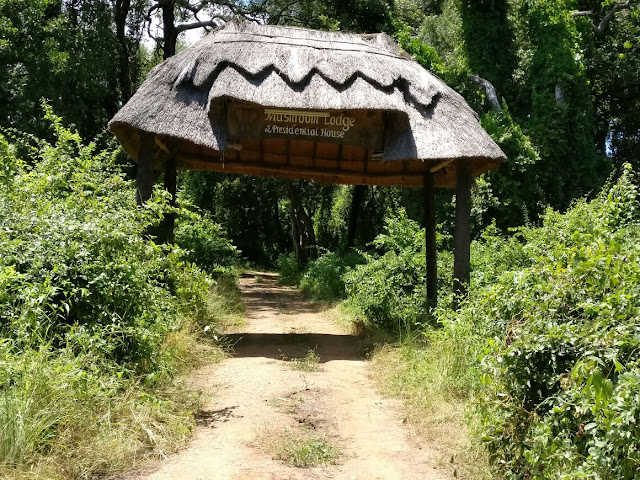 The Safari staff  ran excellent day and night wildlife drives. These activities are included in the rates charged by the upmarket places, while the cheaper lodges/camps can organise things with little notice. 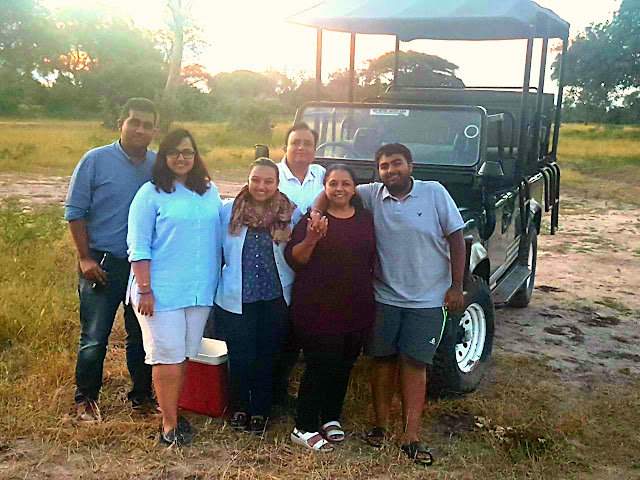 The wide Luangwa River is the lifeblood of the park. It rises in the far northeast of Zambia, near the border with Malawi, and flows southward for 800km. It flows all year, and gets very shallow in the dry season (May to October) when vast midstream sandbanks are exposed – usually covered in groups of hippos or crocodiles basking in the sun. Steep exposed banks mean animals prefer to drink at the park’s numerous oxbow lagoons, formed as the river continually changes its course, and this is where wildlife viewing is often best, we had some really good close-ups, especially as the smaller water holes run dry. 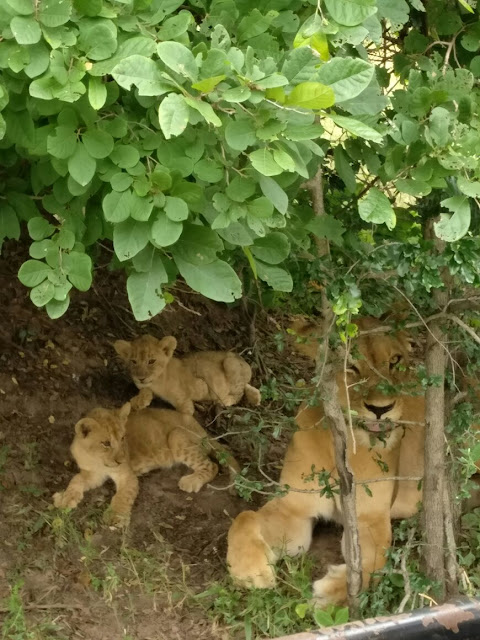 We would return to the lodge for lunch and a rest. But soon enough, it was time to head out again. We left in the afternoon, still suitable for viewing game. We would stay out past sunset and drive into the night, hoping to see nocturnal activity. This particular afternoon was one to remember. The best part about South Luwanga, aside from the healthy large populations of animals and the few and far between tourists, is that unlike many more commercialized game preserves, the drivers at Mfuwe aren’t restricted only to the dirt road. Peter was never afraid to make his own tracks, in fact he did it all the time. While some may say this is dangerous, I never felt like I was in eminent danger. Yes, sometimes being so close to dangerous predators was scary but it was also lost in excitement..
exhilarating that I always got lost in the excitement. 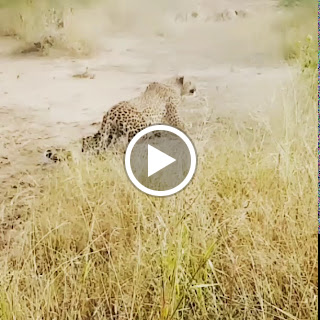 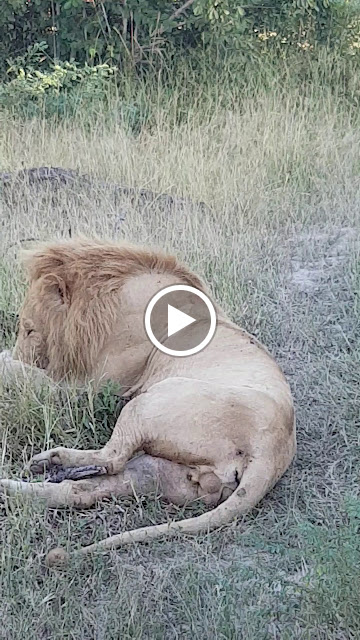 After having seen The Leopard .. The Lion … The Lion Cubs in the first two safaris , all we asked was The Kill … I Mean we were being greedy but every safari goer wants to tick this off their list, don’t we ?? The Kill – There are two ways to look at how a person who follows the Jain Faith looks at it – The educated me looked at it as a nature’s cycle. The smaller gets eaten by the larger and in turn the largest feasts – Law of the Jungle … and then it’s the Heart that feels bad at wanting to see THE KILL. If you are my mother you will hear the sound of Crushing Bones and 6 Lions over a poor Impala feasting and think you have added to bad karma. She did not eat dinner that day to pay penance at feeling helpless that she couldn’t do anything while us children photographed and snap chatted away !! 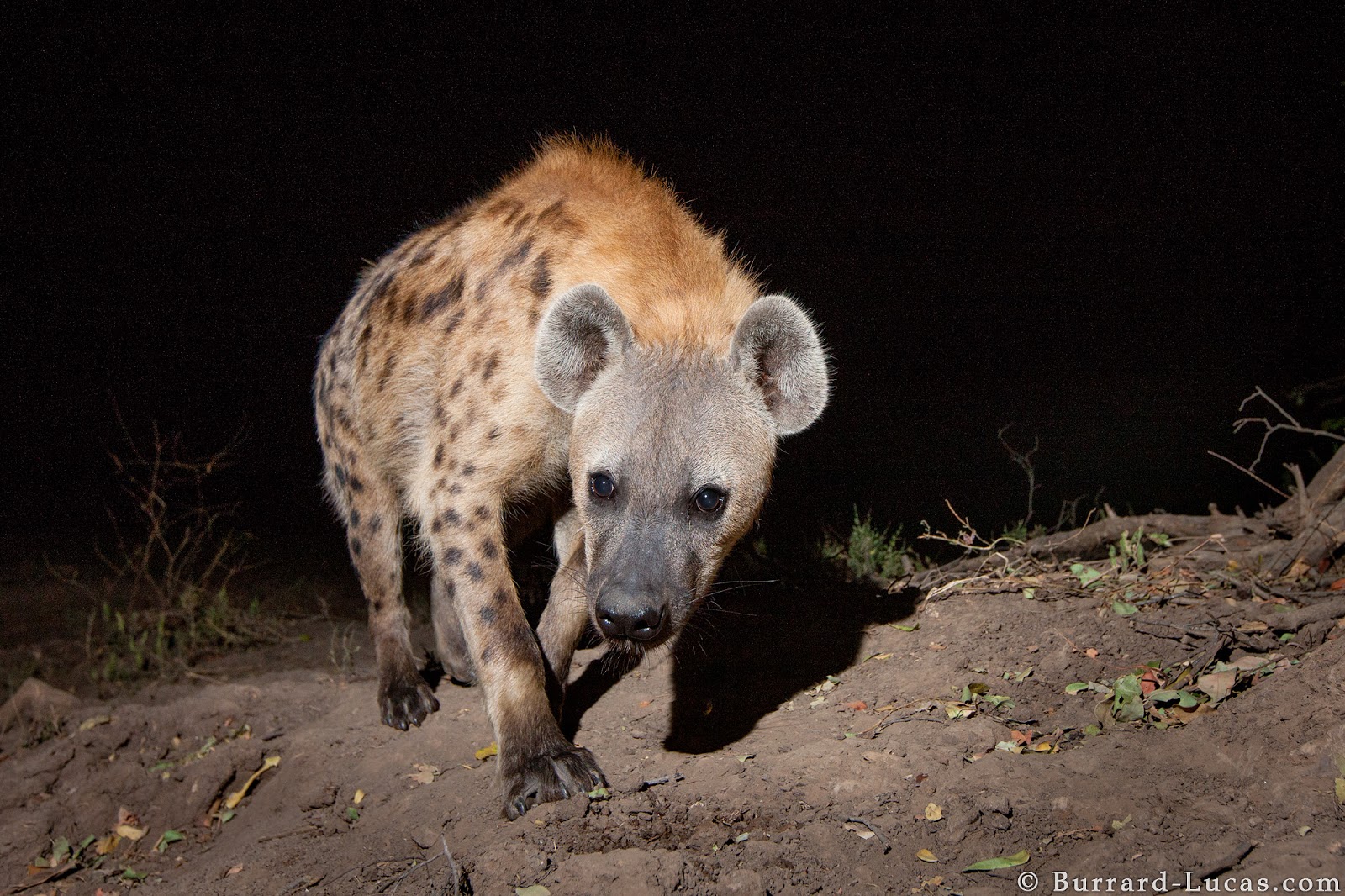 As the night sky took over, a whole new world of animals came to life. Like the spotted Hyena leave the bushes and make their way ...

Elephant numbers are very healthy, even though ivory poaching in the 1980s had a dramatic effect on the population. This park is also a great place to see lions and leopards (especially on night drives). We saw a heard of 6 lion in a kill, 2 cubs with an injured Lioness and a Leopard in a kill thanks to the amazing tour guide and spotter !!

No trip to Zambia is complete without a visit to Victoria Falls … Taking its place alongside the Pyramids and the Serengeti, Victoria Falls (Mosi-oa-Tunya – the ‘smoke that thunders’) is one of Africa’s original blockbusters. And although Zimbabwe and Zambia share it, Victoria Falls is a place all of its own. 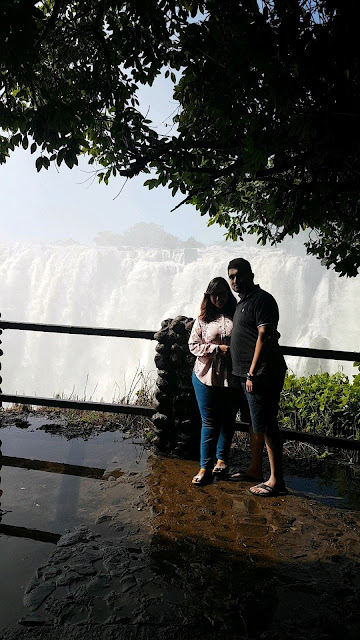 As a magnet for tourists of all descriptions – backpackers, tour groups, thrill seekers, families, honeymooners – Victoria Falls is one of Earth’s great spectacles. View it directly as a raging mile-long curtain of water, in all its glory, or peek precariously over its edge from Devil's Pools; the sheer power and force of the falls is something that simply does not disappoint. 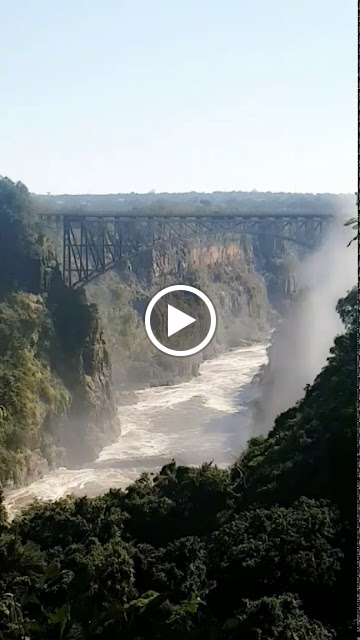 Whether you’re here purely to take in the sight of a natural wonder of the world, or for a serious hit of adrenalin via Micro Flight like we did above the Zambezi, Victoria Falls is a place where you're sure to tick off numerous items from that bucket list. 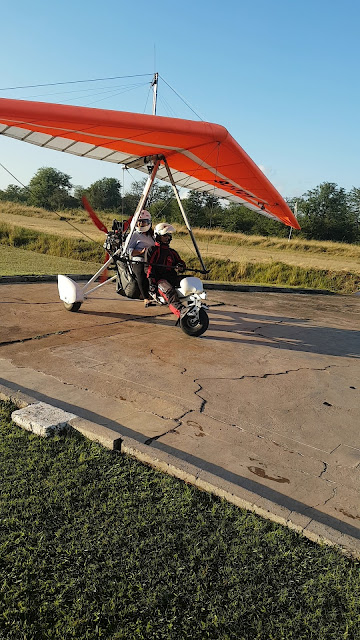 There are so many people to thank for this successful trip but most of is my parents who are constantly pushing us to try different things ... to explore terrains not many people venture out to and always being our biggest critics !!! This trip and every other trip we take with them are full of learnings worldwise and otherwise... Love you guys.