Have u ever been to a place that you only visited – but then decided to make it your home like British singer Raisa Kelly did ? Morocco’s the kind of place you visit once—and immediately know you’ll be back. There’s plenty to make your heart beat fast: It might be the way Marrakech, the Red City, glows as the sun rises, or how picturesque it is to watch magicians and storytellers move in knots through Jemaa el-Fna Square as that same sun sets. The thrill of haggling for rugs and dinnerware and copper trinkets inside Fez's maze-like medina could do it. Or perhaps it’s that Blue of Chefchaouen, We are hooked on feeling like you've escaped to somewhere completely different, where you sleep inside opulent riads, venture into the desert, admire mounds of spices at the markets that you know would never be cooked in your  home or those gorgeous Atlas Mountains and the Rif Mountains that you can endlessly admire while travelling through the country. Then you realize—you’re not even that far away. You can get to this Arab-Berber country, on the tip of Africa, in the time it takes to get to New York owing to all the Flight Connections through Eastern Africa. And all of the sudden, coming back doesn’t seem like such a stretch after all.

Landing in Casablanca is your only choice when coming from India – and I would totally give Casablanca a miss. However there are a few things to see when you land. Casablanca's stunning Art Deco buildings could make it the Miami of Morocco. The city has long been overshadowed as a destination by  the medieval splendours of Fez and the hip and exoticness of Marrakech. However, Casablanca is totally modern. We spent 24 hours in Casablanca and would recommend Strolling Mohammed V and visit the towering Mosque of Hassan II. At night we went to a Hip Resto Lounge – Le Cabestan and people watching has never been more amazing. The Glitterati of Casablanca parading in their Aston Martins and Lamberginis  - the women of Morocco are gorgeous and dress to impress.

The next day was a long journey. Starting from Casablanca , then a quick visit to Rabat and finishing the day at Chefchaouen. Although Rabat has a thousand-year history, it became a major city only in the 20th century when the French moved the administrative capital from Fès to Rabat. Since then it has become a distinguished, elegant and modern city. It is the closest city to Casablanca where one may feel the historical grandeur and cultural diversity of Morocco. The Kasbah Oudaya looks like a simmered down version of Santorini . Today, the Kasbah remains a popular free tourist attraction within Rabat, offering scenic views of the waterfront of Rabat, the Bou Regreg river, neighboring Salé, and the Atlantic Ocean. It is mostly occupied as a residential neighborhood, known for its distinct blue and white walls. An unoccupied site adjacent to the Kasbah is used as one of the concert venues for the annual Mawazine music festival in Rabat. 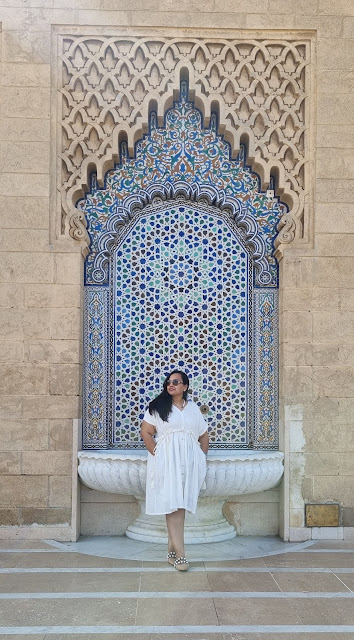 While Planning a trip – I’m always looking for the path less taken – and If you follow  Instagram the way I do and the way nobody should be wasting their time ;)—I ended up going down a total “geo-tag rabbit hole," . While considering all the big names like Marrakech, Fez, Casablanca. I'd never heard of Chefchaouen and was so intrigued by this little town painted entirely in blue. I have a thing for blue hues, so it was a kind of a match made in heaven.  Tucked high in Morocco’s Rif Mountains, the all-blue town of Chefchaouen is a calming as opposed from the overwhelming frenzy of Marrakech and Fez. Once in the Medina, Painted in a palette of mesmerizing blue hues, Chefchaouen's offers a thousand photo opportunities, we literally spent the next hour against every blue wall – each more stunning than the previous one.

Travel approximately four hours to Volubilis the site of the best preserved Roman ruins in Morocco. Dating primarily from the 2nd and 3rd centuries, Volubilis was one of the Roman Empire’s most remote outposts.

Then to Fès, the oldest of Morocco’s Imperial Cities and the kingdom’s spiritual center, Fès is central to the Islamic world. Founded around 790 by Moulay Idriss I, many mosques and mederas  were constructed in Fès. Considered by scholars to be the last true example of a typical medieval Arab town, Fès is under the strict building code supervision of UNESCO. Its labyrinth of alleyways opens to craft workshops, vast leather tanneries and richly ornamented monuments.

Through Wilderness , narrow gorges and bare hills – the route to the great Sahara Desert is amazing. The journey as beautiful as the destination.  The Anti-Atlas stood out against slate-coloured skies, Here and there, where the valleys widened, there was a sudden greening as meagre water courses allowed palms and olives and figs to grow in carpets of grass. The Sahara takes charge of the landscape soon after. we left the paved road for desert tracks, passing a small caravan of nomads resting beneath thorn trees while their camels lazed beside them. The plains stretched away to unfathomable distances. It was impossible to say if a range of low hills was one mile or a hundred miles away. Mirages began to appear, glistening lakes, floating trees, permanently out of reach.  After an hour on camel back on the golden sand dunes, riding like smooth humpbacked whales in a flat sea. Suddenly, the Jannat Luxury Desert camp appreared out of nowhere … Porters materialised like desert genies to unload our bags.  My tent lay in one of their hollows. The size of a small chalet, it was Saharan chic: Berber rugs, wrought-iron lanterns, a double bed covered with piles of cushions, a palette of neutral colours. There was a bathroom attached with a clever water system to allow for desert showers, and a rather nifty chemical loo. In the world of Saharan travel, I was obviously in club class.

We spent than evening with Berber Music meeting Gujrati Garba Folk way into the night. At night we asked our driver where he was going to sleep – he said on the sand – we thought he was joking – we joked with him that we will sleep on the desert sand too – before we knew it we were iterally sleeping under the stars – they pulled the mattress out on the cold sand – we passed out looking at a carpet of stars  - it was the first time in my life I saw not one but countless shooting stars. and enjoyed "Moon-Rising"
The next day we went through hundreds of Nomad crossings, rose valleys and two-tone kasbahs: even on paper, the Dadès Valley stretches the imagination. From the daunting High Atlas to the north to the rugged range in the south, the valley is dotted with oases and mudbrick palaces that give the region its fairy-tale nickname – Valley of a Thousand Kasbahs. Some of the best views are only glimpsed when travelling, along hidden livestock tracks between the Dadès and Todra Gorges and nomad routes across the Saghro.

We arrived in Marrakech our last destination - Prepare for your senses to be slapped. Marrakesh's  sights and sounds will dazzle, frazzle and enchant. Put on your babouches (leather slippers) and dive right in. Marrakesh is a city steeped in ancient artistry that continues to thrive, kept alive by the modern craftspeople of the souqs and the contemporary art and design scene of the Ville Nouvelle.

Bahia Palace and the Dar Si Said are a riot of tilework and intricate floral painted wood ceilings.

The foundations of this historic riad are more than 400 years old, and it was once owned by powerful qaid (local chief) . Here, though, it's not the building but the traditional Islamic garden that is so special. Fed by a restored original khettara (underground irrigation system), the gardens are set up as a living museum to demonstrate the ancient waterworks. 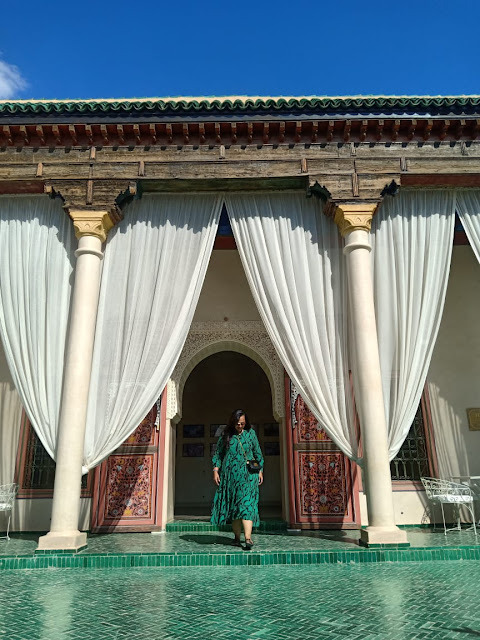 I wouldn’t even miss the Jardin Majorelle and the Yves Saint Laurent Museum. I was blown away and truly inspired by Jardin Majorelle. This twelve-acre botanical garden and artist's landscape garden took expatriate French artist Jacques Majorelle forty years to create. I love places with so much history and creativity. The color combinations are magical.

The core of the museum is the Yves Saint Laurent Hall, a permanent display of his sketches, rotating haute-couture fashions and color-themed accessories. The backdrop is entirely black – a key color in YSL's designs – creating a cavernous cocoon pierced only by audiovisuals of the designer's catwalk shows and recordings of him speaking.

Vegeterian Food was sparse in the first half of the trip where we were going through smaller towns - As great as Moroccan food can be, it is a tough country for restaurants: Cheesy belly dancing and insipid tagine are everywhere, and a dearth of quality ingredients doesn’t help. But some surprising hits are hidden in the medina, and hotels are upping their offers in big city like Marrakech, with sophisticated, damn-that’s-legit Italian fine dining rooms like La Mamounia or the Royal Mansoor. And if I have to mention – I was so happy to see finally an Indian restaurant – far from Indian aesthetics – The Oberoi Marackech has an Indian restaurant set overlooking an Olive Groove – Gone are the days of those oily samosas you ate because you were just happy to have found Indian food in the first place. With lip smacking kebabs and the oberoi hospitality to match … Indian restaurants abroad have finally arrived.

Morocco is a country full of stories, that has, over the centuries, woven its ties to sub-Saharan Africa, Europe and the wider Middle East into whole cloth. Its mixed Arab and Berber population forms a strong national identity, but an increasingly youthful one, taking the best of its traditions and weaving the pattern anew – from the countryside to the city, from the call to prayer from the mosque to the beat of local hip hop. Morocco has a hundred faces and sounds, all ready to welcome the traveller looking for spice and adventure. It was safe for our group of 5 girls – we were on the road for 10 days covering almost 1500 kms – but the journeys were well worth it. I already know I’m going to be in Morocco again.