When I think of Cuba, I always think of my first night back in Havana after a whirlwind trip getting to CUBA … From Santo Domingo we left at Mid-Day and reached at about half past 6 in the evening. At the airport , a crowd of passengers awaiting their cling film wrapped kraft paper boxes bringing back everything – from tiny screws to motor spare parts, each carrying atleast 8/10 pieces of baggage while we struggle with that one extra bag no body wants to carry around and the check in refused to take. The entire ordeal which took about an hour and half to finish. …. Once on the streets, being transported to the hotel in a modern mini-van juxtaposition to the vintage cars racing to get home…  in the old city area of Havana…the busy atmospheric streets, the snapshots of lives lived out in the open, and the unmistakable aromas: tropical papaya mixed with tobacco leaf, petrol and musty carpets. Cuba is a forbidden fruit, a complex country of head-scratching contradictions. Like the lonely planet I grabbed before getting to Cuba rightly describes it “Cuba is like a prince in a poor man’s coat; behind the sometimes shabby facades, gold dust lingers. It’s these rich dichotomies that make travel here exciting, exhilarating roller-coaster ride it is. Trapped in a time warp and reeling from an economic embargo that has grated for more than half a century, this is a country where you can wave goodbye to Western certainties and expect the unexpected.” 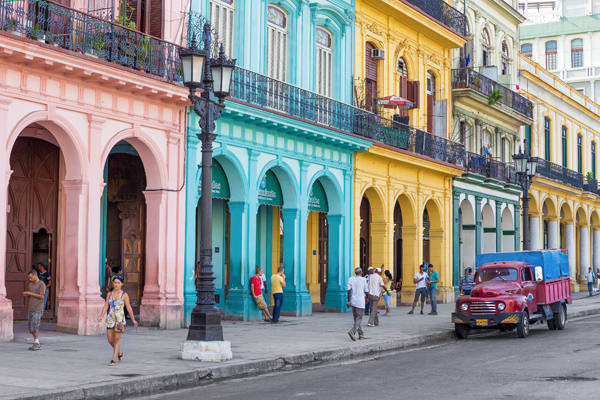 We were staying on the beautiful Malecon in Hotel Melia Cohiba. The Malecon is a promenade facing the sea, around it many buildings lie ruined and tattered like aging dowagers waiting for a facelift. Meticulously preserved, where grandiose lobby with its gold edged railings and a magnificient lobby bar and restaurant tell erstwhile tales of opulence and intrigue. We were in the Level Room which is the higher category New Rooms in the hotel. From our 21st floor Sea Facing room and city facing jaccuzzi Cuba looks timeworn but magnificent, dilapidated but dignified, fun yet maddeningly frustrating - Cuba is a country of indefinable magic. 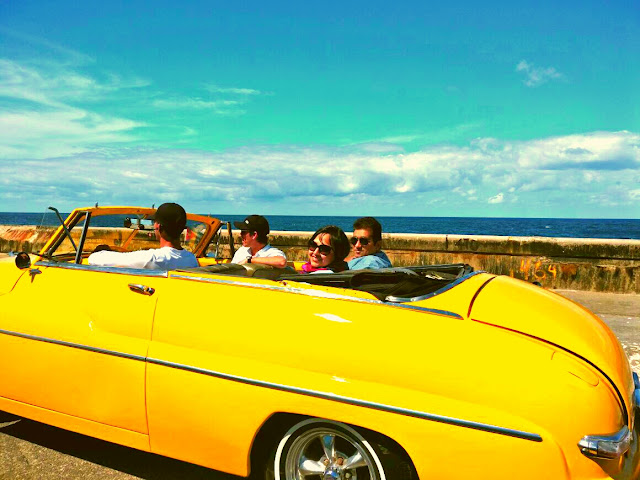 Each day streams of wave-dodging Buicks and Chevrolets travel the length of the Malecon from the gray hulk of the Castillo de San Salvador de la Punta to the borders of Miramar. You can hail one from wherever you are – but the best ones are booked in advance – like we did – to travel in style and luxury. You can also find them right outside the Capitolio Nationale aka the White House of Cuba. 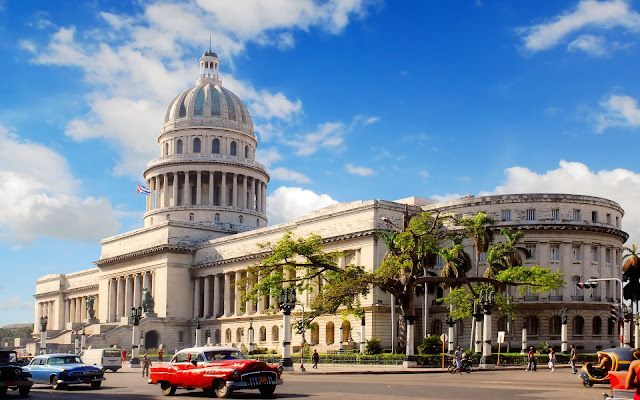 We hopped into our Chevy and we drove around the city. Our first stop was the Plaza de la Revolución. Conceived by French urbanist Jean Claude Forestier in the 1920s, the gigantic Plaza de la Revolución (known as Plaza Cívica until 1959) was part of Havana's 'new city,' which grew up between 1920 and 1959. As the nexus of Forestier's ambitious plan, the square was built on a small hill (the Loma de los Catalanes) in the manner of Paris' Place de l'Étoile, with various avenues fanning out toward the Río Almendares, Vedado and the Parque de la Fraternidad in Centro Habana. Surrounded by gray, utilitarian buildings constructed in the late 1950s, the square today is the base of the Cuban government and a place where large-scale political rallies are held. In January 1998, one million people (nearly one-tenth of the Cuban population) crammed into the square to hear Pope Jean Paul II say Mass. The ugly concrete block on the northern side of the plaza is the Ministerio del Interior, well known for its huge mural of Che Guevara (a copy of Alberto Korda's famous photograph taken in 1960) with the words Hasta la Victoria Siempre (Always Toward Victory) emblazoned underneath. In 2009 a similarly designed image of Cuba's other heroic guerrillero, Camilo Cienfuegos, was added on the adjacent telecommunications building. Its wording reads: Vas Bien Fidel (You're going well, Fidel). 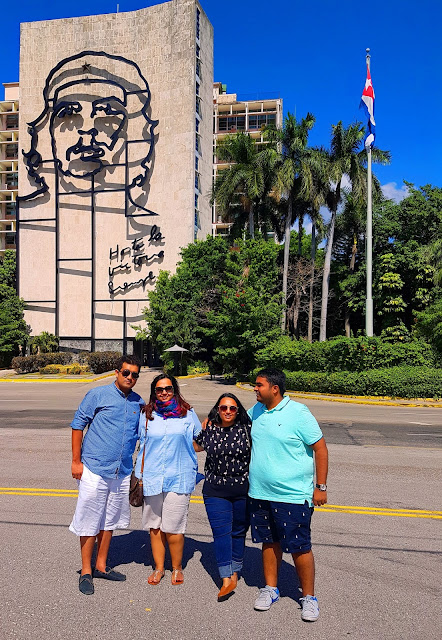 Dominated by two unequal towers and framed by a theatrical baroque facade designed by Italian architect Francesco Borromini, Havana's incredible cathedral was once described by novelist Alejo Carpentier as 'music set in stone.' one of the oldest in the Americas. The remains of Columbus were brought here from Santo Domingo in 1795 and interred until 1898, when they were moved to Seville Cathedral in Spain. A curiosity of the cathedral is its interior, which is classical rather than baroque and relatively austere. Frescoes above the altar date from the late 1700s and the paintings that adorn the walls are copies of originals by Murillo and Rubens. You can climb one of the towers for CUC$1. 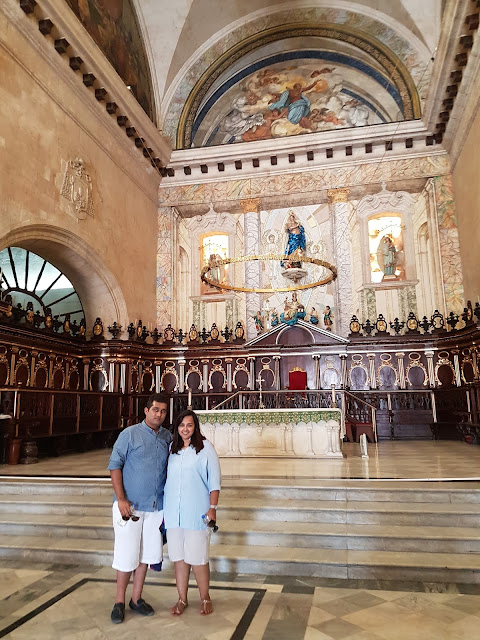 Laid out in 1559, Plaza Vieja (Old Square) is Havana's most architecturally eclectic square, where Cuban baroque nestles seamlessly next to Gaudí-inspired art nouveau. Originally called Plaza Nueva (New Square), it was initially used for military exercises and later served as an open-air marketplace. Sprinkled liberally with bars, restaurants and cafes, Plaza Vieja today has its own micro-brewery, the Angela Landa primary school, a beautiful fenced-in fountain and, on its west side, some of Havana's finest vitrales (stained-glass windows). 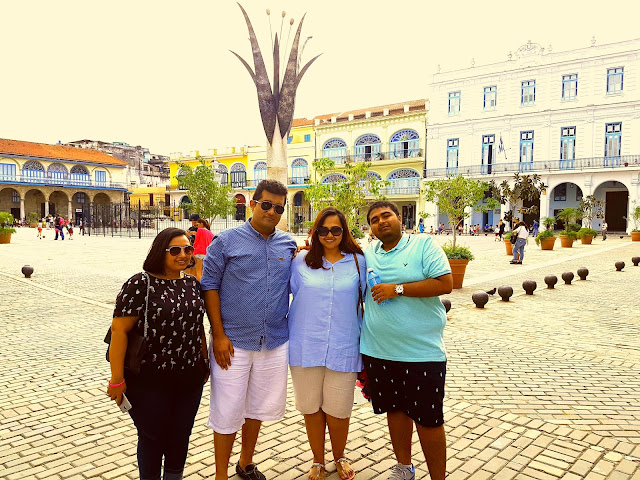 Made famous thanks to the rum-swilling exploits of Ernest Hemingway (who by association instantly sends the prices soaring), this is Havana's most celebrated bar. A visit here has become de rigueur for tourists who haven't yet cottoned on to the fact that the mojitos are better and (far) cheaper elsewhere. 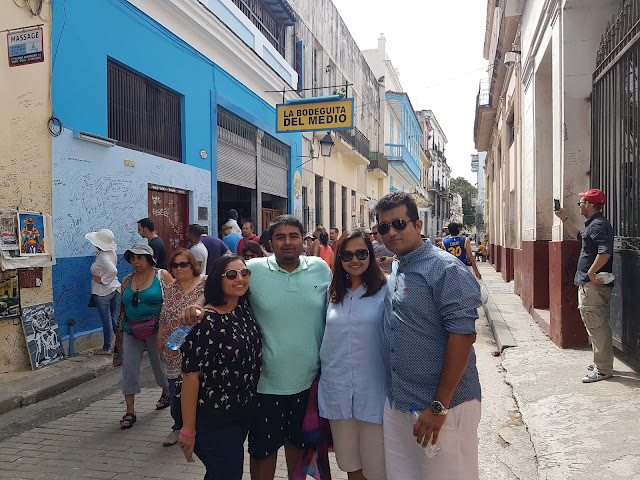 Past visitors have included Salvador Allende, Fidel Castro, Nicolás Guillén, Harry Belafonte and Nat King Cole, all of whom have left their autographs on La Bodeguita's wall – along with thousands of others (save for the big names, the walls are repainted every few months). Let me know if you find Disha & Kunal 2016 there somewhere in the madness... 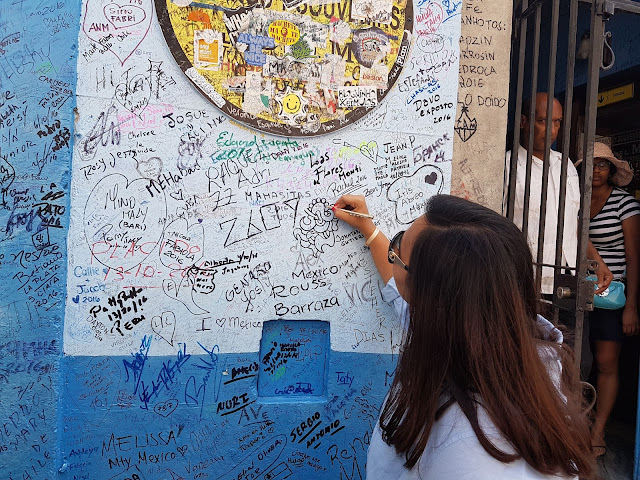 On the corner of Plaza de la Catedral, this cultural center contains the melodious Cafe Amarillo and an exhibition center named after the island's most celebrated painter - Centro de Arte Contemporáneo Wilfredo Lam. Rather than displaying Lam's paintings, it serves as a gallery for revolving temporary exhibitions of modern painters. 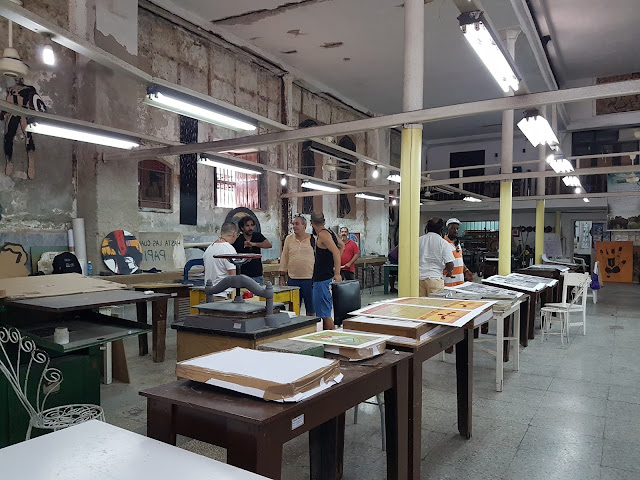 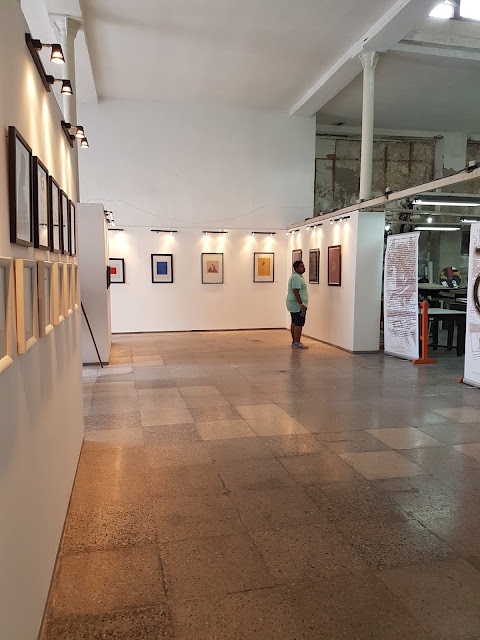 You don't have to be an Añejo Reserva quaffer to enjoy the Museo del Ron in the Fundación Havana Club, but it probably helps. The museum, with its trilingual guided tour, shows rum-making antiquities and the complex brewing process, but lacks detail or passion. 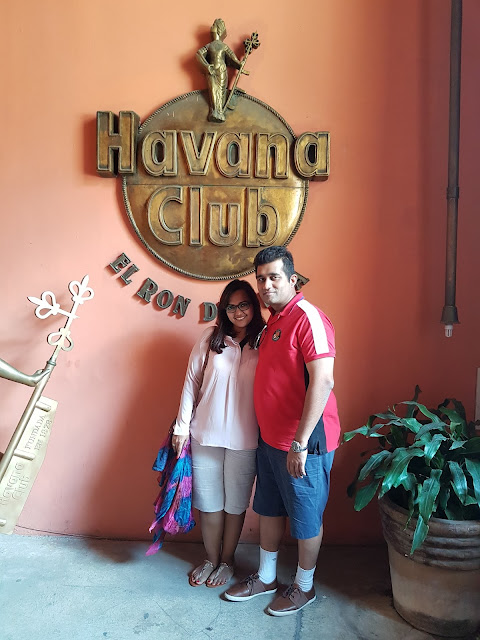 A not overgenerous measure of rum is included in the price. The museum sits opposite Havana harbor. 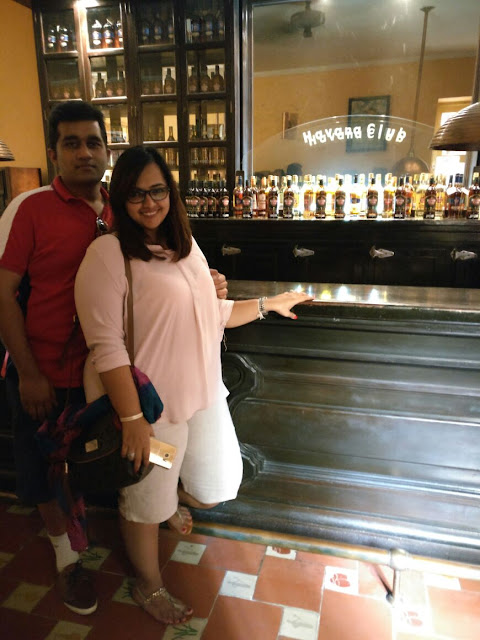 In a country not short of icons, the cigar is one of Cuba's most enduring images. Even if you have no interest in the product itself, a tour of a cigar factory is a must: you'll see workers rolling tobacco by hand and hear the lector (reader) employed to keep the workers entertained in a tradition dating back to the 19th Century. 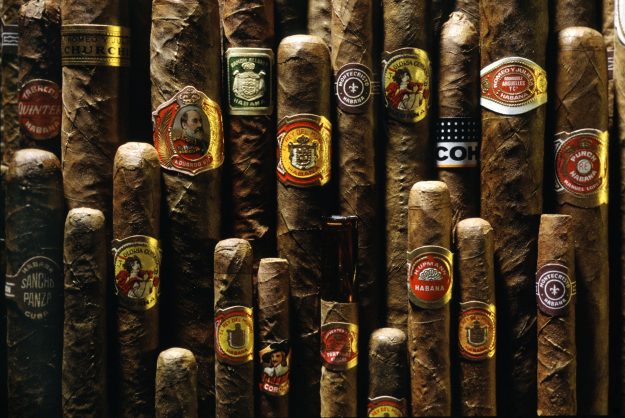 Continue to a rum factory to see how another celebrated Cuban export is produced and to sample different varieties in the tasting room. Both visits offer the chance to buy souvenirs – a great way to bring the essence of Cuba back home with you….. We ended out tour on a beautiful Carribean style Patio with some Cuban Singers on their traditional musical intrusments & the lead singer singing folklores. The Cigar Maestro explained to us how to thoroughly enjoy our Cigar paired with our Rum… One experience that shouldn’t be missed I say ! When in Cuba – definitely drink the Cuba Libre ! 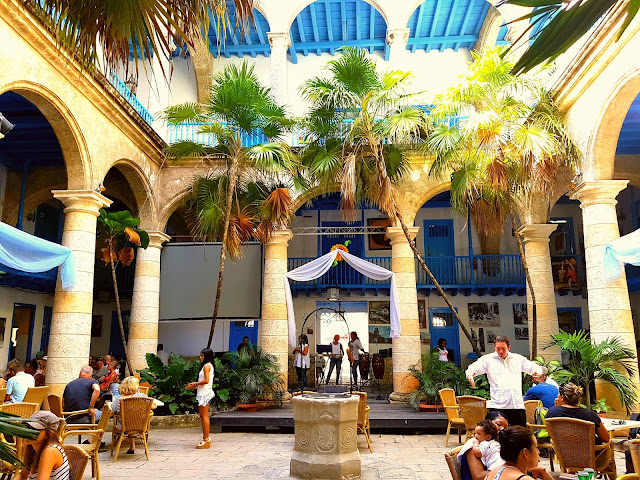 Our sojourn in Cuba was perfect, thanks to our Guide Leo. This young man navigated us through the bylanes, gave us stories from the dark side of growing up in an EMBARGO country… some stories that truly make you believe that there is life without Internet and an economy that can run without the support of the United States…. Stories of valour, stories of economic oppression… stories of an adulthood which is much like ours in many ways and yet different. Leo Doubles up as a waiter in Atelier, a fine dine Italian restaurant, whose claim to fame is having served the OBAMAS in their historic visit. We enjoyed the Pasta and the desserts there – they understand Vegetarian so easily… which is their big plus point and everyone from the server to the waiting staff all speak impeccable English and are super friendly. 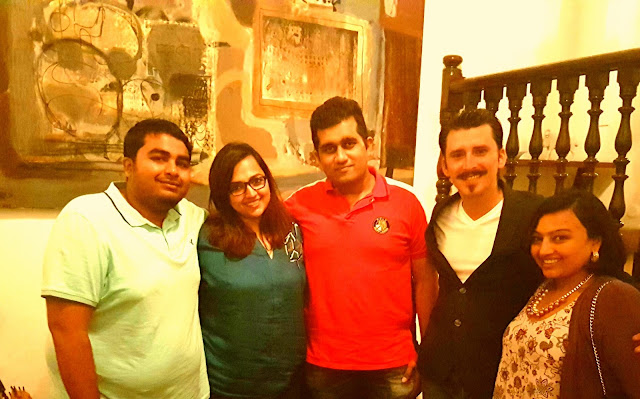 With Leo, who also introduced us to this art gallery owner, who is also a photographer who made me the best cold coffee with local dark chocolate in this gallery cafe... this place hides behind plaza de armas ... It has a very Miami vibe, something I was to learn only later when I actually visited Miami. 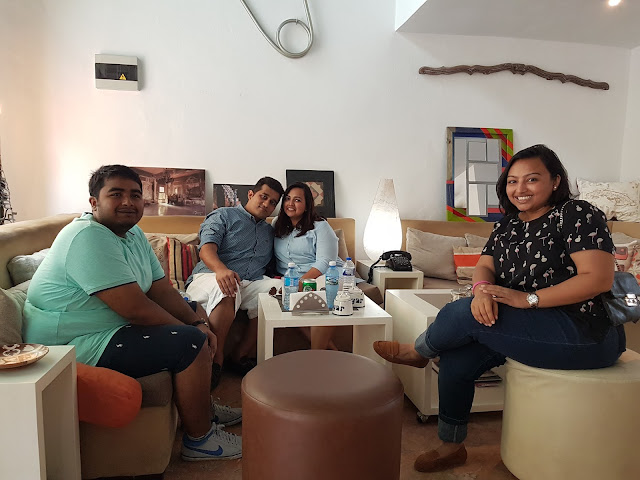 For a quick deli style meal, in between your walking tour, near the Capitale is El Del Frente, sit on the open air terrace for the world's best Tacos and a side of Guacamole to die for ... we went twice - because we loved it so much ! The place is impossible to find without Google Maps, download an offline version before you enter Cuba, else good luck finding a good Internet speed to do that while on location ! 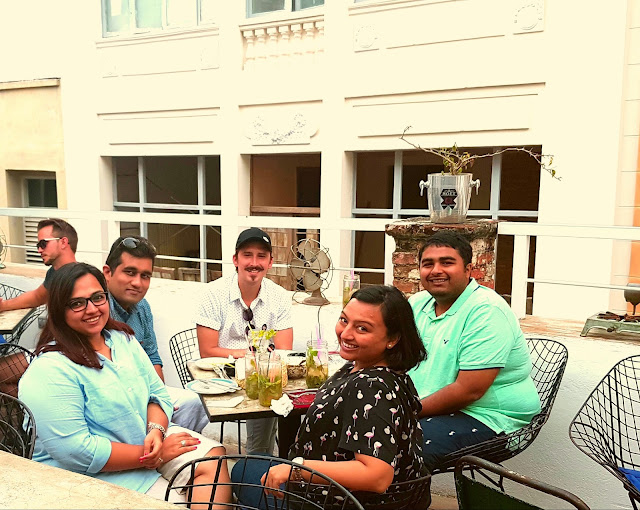 We also ate at Cafe Artes de Aguillar ... they have the best Cuba Libre and a winning cocktail list. The Pasta fare is worth going for. 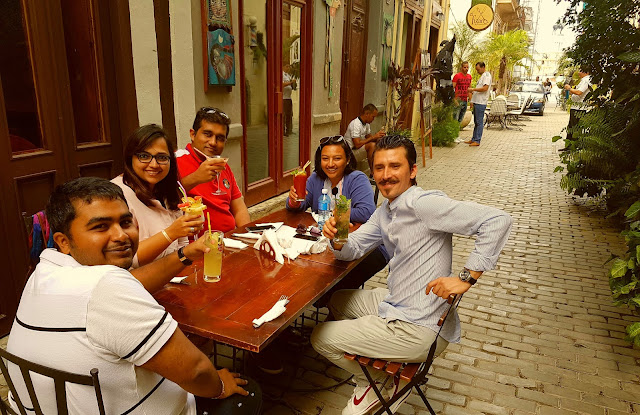 There is also a Hukkah bar - for the addicts like me. Head over to Enventos - the place is nothing fancy... but in a quite street not far from the Malecon. Call before going to not be disapppinted - they sometimes run out of flavour and wait for their good friends to travel to Miami to bring them back ! This is Cuba, it can frustrate you one minute and unexpectedly inspire you the next... Leo sourced the most amazing Cuban Cigar's for us at half the rate of the factory price, since his future mother in law worked as a tourist guide within the Cigar factory... he even brought back some local ones far better than those exported for us to try. He went out of his way to find someone who could drive us safely back home after Enventos so that we wouldn't have to pay Tourist money since he behaved like he was family ! I loved Cuba's robust culture, and its wonderfully preserved history which is on its way to changing. Go there before they start to please the American tourists dying to go there and loose a little bit of themselves slowly and surely like the rest of the world !