Would you give a 4th chance ? 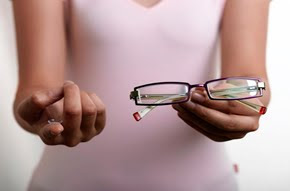 Have you ever given anyone a FOURTH chance ?
It’s one of the first things that you think of when you are recovering from a heart-ache – A MAKE OVER. To many girls envy – I am an extremely practical person which my friends dis-agree and call Emotion-Less. I accept criticism and take it in my stride and move on. A few months ago I dumped the idea of being in LOVE with this one man for the last 10 years and look for greener pastures that were waiting for me. I have been be-spectacled, first by choice and then out of sheer necessity for a good 5 years.

I am a sucker for routine. And I like getting up and putting on my glasses and going through with the mundane things of my day. But I decided to do things different that day. Right before getting into work, I stopped by the Opticians. After getting my power in both my eyes checked I sat in front of the mirror looking at those little dials called Contact Lens. The local cable guy ran incessant ads of Turakhia Opticians day in and day out – those who are privileged to live in the Andheri-Juhu area getting 7 star cable network would know. A terribly geeky looking guy called Bunty walks into the store and say, “Chashma, mujhe Kabhie nahi” –And a wise looking helpful eye doctor says, “Bunty yaar, Phir tum le lo contact lenses – contact lenses !” And Bunty walks out of the store with a fresh air of confidence. And as soon as he does an equally under-paid horrible looking model passes of to be a hot babe walks by and becomes friends with Bunty.

After being coaxed into trying various evil looking shades – this is precisely why I hate smaller retail formats and sales people, I settled for a clear pair of lenses that can be used for 6 months. On my first day I tried every angle – put the mirror on a higher platform, then a lower one, stretched my eye with2 fingers as instructed, then used all my fingers, then poked my eye several times, cried as soon as one fit in, rubbed my eyes because one would refuse to settle, by the time the other one fit the first one came out. Oh it was a nightmare. My routine now consisted of 20 minutes each day of adjusting and re-adjusting. They said that I would get used to it in a week’s time.

But on my 6th day I was sitting in a high speeding Auto-Rickshaw and one flew out of the coucou’s nest. It all happened in a flick of a second. One minute it was there. And the other minute it flew away with the air. It took me 6 weeks and about 3000 rupees to get another pair of lenses.

Round 2 was equally painful. For the first 3-4 days I only wore it on dinners or occasions – which meant only for a few hours of the day before I wore it to college one morning. After about 3 lectures I was even careful and went to the washroom and put the liquid in so that my eye does not feel itchy. I was sitting in the last lecture of the day. I was tired. I could hardly concentrate, when the boy sitting next to me pointed out to something on my face. One of my lenses had come out and was sitting right on my cheek. I was frustrated ! I had no case to put it in. After holding it on my finger for about half an hour I put it in an empty plastic bottle.
When I reached home i could not put my finger deep enough to a place where the contact lenses had slipped to and got stuck. Since it had become dry it had now become rigid. I had to literally slice the bottle into 2 to get to the lenses. The next day I took them to the optician again. Much to my misery I had lost this one as well. This time i did not buy a pair instantly.

A few months down the row – it was my Best Friend’s Wedding. And since I am of the “MARRIAGEABLE AGE” my mother parted with another Rs 3000, just so that I don’t look geeky in spectacles and Salwar Kameez. This was my 3rd attempt. I never give anything 3 chances before I write it off. But I did – to the concept of CONTACT LENSES. I was already running late, but I spent precious getting ready time poking my eye. And finally when they were in I left my house. I used the time in the lift and in the car on signals to plaster myself up. I don’t know whether it was the Mascara that touched the eye-lid and spread in the eye or whether it was the liquid eye-liner which did the trick – but yet again I had to poke myself hard – this time almost hurting my eye. My eyes were up in flames !! Finally I took them off and went inside for the wedding. I lied and told my friend she looked very pretty, when in fact she was just a hazy picture in front of me.

Do hell with people who told me “Oh darling, you just have to get used to it” or “Oh it takes time... but you got to do what you got to do !” I am not giving CONTACT LENSES any more chances. I am going to be be-spectacled for the rest of my life ! Enough chances given. I am not going to give something that has failed me 3 times a 4th chance. Would you ?
Posted by Disha Doshi Shah