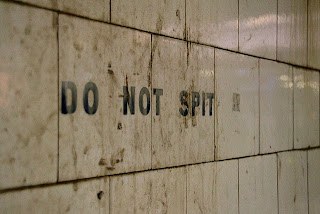 I was racing towards the traffic lights, hoping I would cross this signal.. I prayed for Krupalu Dev to let me pass. But the White Honda City in front of me screeched and came to a halt and so I was forced to slam the brakes and wait behind him. This is Andheri East’s longest wait signal. The timer showed 110 seconds. That is close to 2 minutes. Now if you were watching mindless T.V. at night – 110 seconds goes by in no time. But if you are impatient to make it to your 9 30 a.m appointment like me – 110 seconds is long enough time.

So I put my car on neutral gear and turned off my car engine. I checked myself in the mirror – its a GIRL thing to do. If you are a boy you will never understand. A quick look and a few strokes later I decided my hair was in perfect shape. Then I started changing the radio channels – when the white Honda city in front of me – the driver’s seat opened. A Man with a long beard, wearing a stark white kurta ducked. He then bent down and in no time he was spraying fresh RED, saliva smeared Beetle nut juice on the road. If that was not enough, he then spat the chewed out stuff as well. It was a disgusting sight.

I started honking. Trying to get his attention ! Had it not been for my automatic window mis-function I would have rolled down my window and given him a peace of my mind. He looked back – for my horn was loud and constant. He threw an angry glance at me. I showed my disgusted face. Then I pointed out my index finger at him and then started swaying it from left to right, indicating don’t do it. Disgusting glances are a universal heart touching emotion. He just smiled in embarrassment and then He immediately shut his door and started talking to the others in the car.
This had left a bad after taste in my mouth. I managed to scrape my car a little bit on the right but I pulled up next to him. I asked my co-passenger to bang on his window. He shamefully rolled it down. I asked him a simple question – “Aapko Gandaki Felanesay Sharam Natthi Aati ??” He looked ashamed. He was still chewing on the remains clearly wanting to gulp everything down. He smiled again and then said “Sorry Madam !”

By then all the Rickshaw Drivers were looking at this 23 year old giving a lecture to a 50 year old. Everyone was probably thanking their stars for them not being in his place. The man was praying for the 110 seconds to get over. These were probably the longest 110 seconds of his life !! These 110 seconds made me feel like a ROCK-STAR.

I made it in Indian standard time to my meeting. I rocked it as well !
I may not be a Gandhi Bappu leading a quit India movement – but I am surely happy to rock at the quit chewing tobacco and spitting movement !!
Posted by Disha Doshi Shah