We are Family - Review 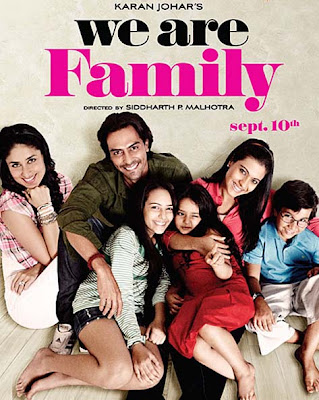 I walked into the theatre and sat next to my mother. Now for those of you who know my mother would agree – and for those who don’t know anything about her – here’s the thing. She is a lovely lady. She be-friends the ugliest person on the road. She is not god fearing – she is rather god loving. She believes in destiny and her favourite dialogue of all times is, “If it’s written in your destiny.. it will happen !” She has some solid children in us. When I say solid – I mean highly opinionated, strong headed, fiercely competitive and street smart individuals and above everything God Loving like her. But – she knows and the whole world knows that when it comes to Love – her ways are different. She is not the mother who will feed you when you are ill by your bedside – she would rather ask you to pull yourself together and come to the table. When you fall, she will not come running to your rescue, she will wait for your to respond. And if you cannot manage, she will give advice – but would let us make our own decisions. It’s not that she lacks the basic emotion of LOVE, she is rather full of it. She has other ways of showering LOVE – which only us being her children understand.

So – when we walked into the movie – WE are FAMILY she was sure it’s going to be a hell of a drama teary eyed type of a movie – she had already written it off. My sister was not feeling well – and my mother did her thing – gave her a medicine and asked her to rest – for she had movie tickets for us, lest she would have to sell them if she decided not to come. Throughout the afternoon we kept harrowing her and told her she didn’t love us so she talked about how she does not need to show us she loves us – but she loves us.

I on the other hand was so sure of myself.. that I am going to cry. So sitting next to a strong mother would prove better than sitting next to my brother – who against all his machismo at home cries at a drop of a hat in the Movies. I was careful enough to not put any eye-liner – I did not want to look like a horror movie character (something I learnt after watching In Pursuit of Happiness) The movie is not pretentious. This is what I liked about the film – in the beginning itself it said – it proclaims - Inspired by the movie STEP-MOM. I had seen that movie – Julia Roberts being my favourite Hollywood actress and all ! Kajol being my Indian Julia – ofcourse I was going to watch the movie on the day of its release.

The film is very predictable – Happy modern lives – father photographer loves a designer. Single divorced mother with 3 loving kids, who hug her every possible moment. Everything is okay until the kids know about the other woman in the father’s life. Of course there is going to be some resistance on the part of the kids and the single mother – but obviously poor her is stricken by cancer one day and then the bitch becomes the saviour – and that’s the happy family we are going to talk about. Straight out of its Hollywood counterpart.

What I love about the film is.. That Kareena Kapoor for the first time in my eyes, plays a dignified role. The simplicity of her character makes the audience in me love her. By the way I have never been a big fan of hers. Never say never I suppose. Next up is Arjun Rampal. Totally daddy material. At one point in time we could even see a white hair in his head. A believable character. Could have done with some more screen space – but the movie is short – which works in the positive – and the movie is but of course all about the mothers. Then are those kids ! The 2 little ones are cute to the core – the eldest girl could have been a more tyrant.

And then comes the gorgeous Kajol. I cannot see 1 person in the entire industry who could have replaced her. Being my favourite actress – maybe I am biased towards her... but I absolutely adore her !! Brilliant dialogues, excellent expressions, no long shots – making her look absolutely gorgeous – I would say even if she put of another 100 kilo’s – she would still be my favourite – do hell with people who shun her weight.. her craft is precious !!! Every emotion strikes the right chord with me – and the general audience. The mothers – especially the one sitting next to me is now relating to the character. No one in the entire movie theatre is left behind – the movie takes everyone ahead with them. Everyone weeps in unison.

Even those heartless little college brats - the biker types are reduced to seriousness when Kajol collapses on the kitchen floor. These are signs of how gripping the story is. Hats off the Director Siddharth Malhotra – for having made such a strong film that grips you till the end. The sets are fantastic. The music and the background score are in tune. The costumes are neither over the top, nor are there any signs of them not being a Dharma Productions movie – Top Notch I would say !

The only thing I had hoped for is for the movie to have ended with Kajol’s death. I love the fact that there is no atim sanskar – else it would have been more crying than actually feeling the pain and the sadness and a void. I understand the whole Aliya marriage dialogue... to have a happy ending – but a not-aged Kareena leaves the audience wondering of the time period lapse..!

But the movie has a strong message – that of LOVE. We are Family can be anyone’s Family. My mother left the theatre’s teary eyed. The film had touched the mother in her. The movie left me teary-eyed... ! All in all, I absolutely loved the film.
Posted by Disha Doshi Shah