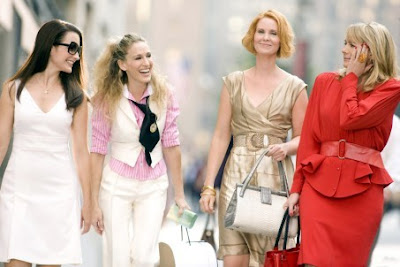 A very excited me puts on My Zara Dress, Pulls up leggings from Lacoste, stuffed my Louis Vuitton with my Mac Eye shadow, L’oreal Mascara, Cristian Dior Lipstick, Bobby Brown Rouge, Body shop creams, Wore my best Mont Blanc watch, slipped into my Aldo Balerinas’, put on some Gucci perfume and called up my GIRL FRIENDS to go catch the movie that taught girls what BRANDS are, what FASHION is, What LIFESTYLE is, Why SEX is a prerogative of both Men and WOMEN ! SEX AND THE CITY is not just another show turned into a movie. It is like making BIBLE of LIFE into a fun learning module – about Fashion, Life, Love and SEX !

The movie starts amazingly well. Carrie’s new adult home is one to die for. You want to purchase the house in an as is condition and live in it. And it works well for me if she was to throw in BIG as a Freebie. I would give her a million bucks for that. The fashion forward home with the big closet, a place for her shoes and bags... I almost said to myself its perfect ! Until... Oh yes, There starts a disappointment. Which multiplies into 2. When You see Miranda playing the same plot all over again. The Mommie who cannot make it to anything. And when she finally does, she makes us city girl loose hope that there can ever be a balance. What happened to the fighter in her ? Why wasn’t there a scene where she stands up in that boardroom and fight with the MCP ! DISAPPOINTMENT.

Charlotte is the only character who has shown progression. From the girl who ran a small art-gallery to the woman who has finally grown into a mother. The now real mommies, who have grown watching Sex and the City as a series can identify with this character. She is the constant throughout the film. Even in the end she is searching for the GIFT for her daughters, which Miranda – the other mommie conveniently forgets.

Samantha – forgive me for not saying that she is playing the same character throughout. A little over the top with the Yam’s and the 44 hormone/ vitamin tablets ! This is one character that makes you laugh. One could never associate with her – one never will. One can only dream about living the Samantha way, and she maintains this Sex Goddess like vision of hers.

But the series is also about THE CITY. The city of BIG dreams – NEW YORK. The city where there is bustling life, shopping, cafe’s, night clubs, bar tenders, dancing, singing, brunches, lunches, dinner dates – everything about NEW YORK and its PACE... And Abu Dhabi will never be New York. The pace of New York can never be replicated in a larger than life city. And it will never be. When in Abu Dhabi- The girls turned into Aladdin’s Jasmine.. with long flowy outfits, outrageous colours – what happened to being suckers for Haute Couture, The funny looking turbans and headgears almost makes you want to PUKE. I miss the Hats... and the perfect hair. 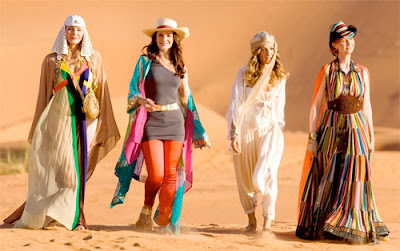 But if there is something which is absolutely attractive about the film- is that charming Mr Big. BIG from being a womaniser has turned into a domesticated man. Carrie tamed the poor Lion – only to find that she fell in love with the King of the Jungle and not the normal married guy of the kingdom. He has grown up into a MAN that every woman wants. He is the MAN of my dreams. Calm, composed, successful, intelligent, a charmer and a LOVER. The last scene would move one to tears – but alas one is still recovering from the bunch of irked Arab men of Abu Dhabi. Samantha looks psycho. The movie has no depth in emotions and is lost somewhere in translation.

So Sex and the City 3 – if you are ever going to be, please do not travel to some other place – maybe in the jungles of the Amazon – and then turn my pretty New York ladies into Jane of the Jungle.
Posted by Disha Doshi Shah