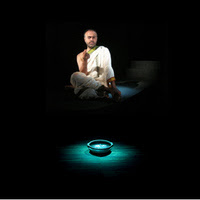 The play premiered as the opening show at the prestigious Ranga Shankara Theatre Festival in Bangalore, India in October 2006. Since then the play has completed over 50 performances in Bombay, Bangalore, New Delhi (opening the National School Of Drama Festival) and Kolkata to packed and appreciative audiences.

Destiny – I was to go see the play with Hrishabh, but the Mr Late Latif was in Bandra at 8 45 – he would never make it to the closing bell. And hence – in the nick of time Aakash Shah – the play enthusiast grabbed the opportunity and 2 mins before the close we walked into Prithvi Theatre. Tickets were sold out – Wednesday night in Juhu ?? There is no logic except it’s a Karnad play after all. We would have thought getting front row seats would be impossible – but we did manage to get 2 – only to realise that the mid-level this time, as Arundhati Nag advised to those early birds standing in line, because of the unusual set design.

There was the smoky fragrance of dhoop around us, and long ropes of blue light, as we waited for the play to begin. Not that we had to wait any more than 50 secs. This Rangashankara and Rage co-production has been directed by Roysten Abel with Rajit Kapoor performing the 90-minute monologue. The visually breathtaking set design, by Roysten Abel and executed by Shashidhar Adapa and Selva Kumar, consists of an elevated platform, such that the solitary character seated on it appears almost suspended in the air. Below him, on a stage scattered with tiny white jasmines, is an urli decorated with flower garlands. Just visible, in the shadowy darkness behind the urli, is a heap of jasmine flowers sloping gently over a Lingam.

The man sitting on the platform stands up, turns around to face us and begins to speak. The setting is a temple, and the man is standing above the temple tank. He is the temple priest who has been worshipping the Lingam for years, decorating it with fresh flowers every day, softening the black stone with daily worship, talking to it, even discussing contemporary politics with it. A married man, he lives with a devoted wife, children and old parents. One day a courtesan, Chandravati, comes to offer prayers at the temple. The priest is attracted to her. After a few silent interactions, when she does not appear in the temple, he goes to her house to find out the reason for her absence. She tells him that she is having her menstrual period. When he visits her house again, after two days, she has had her cleansing bath. She invites him to decorate her naked body with ropes of flowers, the way he has always been decorating the Lingam. Their affair continues like this, but one day, on the night of the play, the priest must confront his powerful conflicts - the pull of love on one side, and duty on the other; his love for Chandravati, his love for the Lingam, his loyalty to his chieftain, and his loyalty to his wife.

It’s not Karnad’s most powerful play - my favourites are Tughlak and Taledanda. I also felt that its English title, Flowers, didn’t quite fit for a play with such a serious theme. Nevertheless, it’s a beautiful, moving work, with some superbly crafted sentences, a rising sense of conflict, and a fine, controlled plot - the hallmark of Karnad’s best work.

But for a 90-minute monologue, Rajit Kapoor’s performance was disappointingly lacking in feeling and energy. At times, he seemed to bereciting his lines, rather than enacting them with the passion of a conflicted, desperate man. I thought the play deserved better.

But ofcourse – Aakash and I didn’t like it at first. While walking out we did try to make conversation – because the last 20 mins of the play were stretched. I had to sleep over my thoughts and when I woke up this morning I decided I still have mixed feelings for the play. We wouldn’t recommend this play, had it not be for the amazing concept of the central plot perched high up – as though suspended in mid-air.
The conversation after the play was rather more interesting – as it always is with Aakash Shah - my soul brother !
Posted by Disha Doshi Shah