Me Grandad Ad' an Elephant 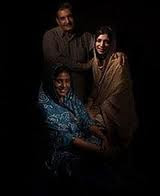 I wasn’t expecting too much out of the play. For an odd title like that – I thought the Ragda pattice with Hrishabh Sanghvi to keep me company would be the high point of the evening. We talked about me being judgemental – it did tick me off a bit, but I care less about people’s opinion with ever passing day : )

2 bells down, he was still finishing the last of his mushroom sandwich and going gaga over the Irish Coffee which I promised we would drink after – we went inside. What I love about Prithvi Theatre is the size of it. Its small and cosy and rather welcoming. We sat on the stage left, and I did not regret it. From start to finish, this play has been adapted superbly.

If you are a theatre enthusiast like me, this is one which you definitely should not miss. Based on the Novella by Vaikom Mohammed Basheed and translated by R.E.ASHER & ACHAMMA COILPARAMPIL, “Me Grandad ’Ad An Elephant!” is the story of Kunjupattumma, an innocent and loving soul, who lives with her family in the Malabar region of Kerala. It revolves around the growing pains of this young Muslim – Malayali girl in a society of conflicts and is set against a backdrop of implied criticisms of outdated Muslim customs, an appeal to live in the present, an abundance of comedy.

Dilshad Edibam – playing Zafar Karchiwalla is simply outstanding !! Words cannot match her acting skills – her little snotty remarks of a 17 yr old.
The play attempts to understand a shy girl played by the beautiful Alam Khan, who is at the centre of human life, a community, a village in North Malabar. Lilting melodies and charming lyrics lend this story a delightful flavour that brings the region and time alive on stage. What emerges is an unexpected blend of laughter and tears, of mellow moments and sudden threat that are very intimately related to a fanciful legend about a Grandad Who Possessed an Elephant.

The story moves onto a then typical riches to rags story.. And then about a bickering household. The mother – Ayesha Raza beautifully portrays the blinded mother, fooled easily into believing folk-lore, black magic and a god that seems to not hear anything.
And ofcourse.. There is the comforter – The handsome Zafar Karchiwalla – He stole my breath away. With the depth of his voice and his poise and posture – this man surely did have women go weak on their knees. He steers this lost household into leading a life with modern day value systems.

If that was good enough for me – the girls singing in chorus – each one beautiful in their own right, danced, shook their neck in a story telling fashion and rolled their eyes to emphasize the GrandDad’s Elephant – The story was peppy, the people were amazing on stage and the audience instantly responded.

I have seen quite a few musicals on Broadway and in the West End – but this one – with the bare basics simply bowled me over… Tam tit a tam… tit a tam tita tam… The music is so well composed – in the end everyone was humming it while walking out.
Of course – The Irish coffee was not forgotten. And that was worth it too. The conversation between Hrishabh and I steered to childhood sweethearts and marriage – no no – not between the two of us – in general – that seems to be a flavour of the season for all 24 – 25 yr olds…! Even at the end of night, when we bid adieu – I couldn’t help but sing with a little neck shake and the big eyes .. Tam ti tam ti tam.. !!!
Posted by Disha Doshi Shah