Walk in the Woods - By Ratna Pathak Shah 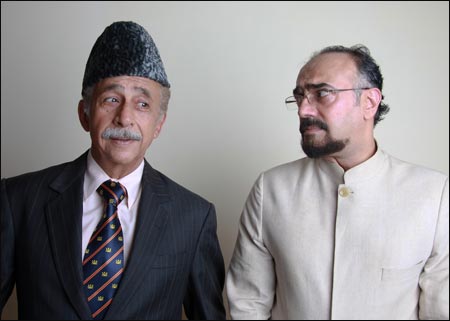 What do you do ? Well , you negotiate !  And when Uncle Sam intervenes and scolds you two to sit and sort out your differences.. you meet up in a peace loving territory called Geneva which is actually miles away for both you and your neighbour and usurp hundreds and thousands of tax money of your nations wealthy and come up with NOTHING !

So when Motley decides to make a play out of NOTHING.. you are made to wonder what is it really going to be about ? You know immediately for sure that the younger college crowd is going to give way to a much older, polished and theatre aficionados coming together for some classic story telling.

Walk in the woods is a good adaptation of the original play by Lee Blessing’s which revolves around the relationship between an American arms negotiator and his Russian counterpart at the height of the cold war.  Faisal Rashid and Randeep Hooda's Indian adaptation for Motley takes us into the woods of Geneva. Diplomats/negotiators/interlocutors representing Pakistan and India, Jamaluddin Lutfullah (Naseeruddin Shah) and Ram Chinappa (Rajit Kapur) discuss a proposal which aims at decreasing tension in our sub-continent and bridge the strained relationship between India and Pakistan.

The talks in the middle of the woods are to make progress towards the peace efforts. Jamal, Nasseruddin Shah is an older and a seasoned Diplomat who is cynical and quickly dismisses his younger counterpart Ram’s lofty ideals. Ram, Rajit Kapur is a newly appointed negotiator who is determined to get the job done. He is righteous and aims at moving to a closure.. in Black and White. Shah alleviates the crowd with some humour and Kapur does an equally good job at pulling the crowd towards feeling helpless being an Indian. Both Shah and Kapur bring their A Game onto the stage. Although if you have watched Flowers- a monologue by Kapur, you help but wonder if it’s the same voice modulation ( read my review for the play here ) ? Although Shah has played the urdu or Pakistani cap before.. he brings a different shade of the same characteristics on the stage – which only someone with years of acting experience could bring to you.
Mihir Thaker and Amrita Bagchi's stage design is simple yet aesthetic and appropriate and is suitably transformed, indicative of the changing daylight by Michael Nazreth's light design.

Costumes by Ratna Pathak Shah and Sajid of Intouch Fashion are well thought through and bring a marked distinction to Shah's Jamal and Kapur's Ram. As Mumbai Theatre guide rightly said, “Vishal Bhardwaj has composed two poems that are sung by his wife Rekha Bhardwaj but they need to find more resonance in the production. In the same way the overall music arranged by Atul Raninga does not elicit any special remarks.” The direction although might seem very easy.. Ratna Pathak Shah needs a bit of a mention.

On a personal level it hit me because I am a very Black and White person. I usually push for decision making. But for the very first time I realised being in the Grey – in the middle of a negotiation is as important. For the very first time I thought not taking sides was the way to go. Whether Pakistan has formed a peace treaty or India has formed a peace treaty.. the outcome is always going to be the same. It is going to be rejected by the other side.. because giving in is a major part of a peace treaty. And giving in is a sign of weakness in this day and age.

Part of the play are slow and I would have liked it to be no more than 90 mins. But it works – it leaves you with a pinching feeling knowing that you would rather have no successful completion of a peace treaty than to be in agreement with a Pakistan’s peace treaty efforts. It also makes you feel equally happy that “bureaucracy” apart from “Kashmir is ours slogan” is something your conniving neighbour and you share in common. You sense the sarcasm when they mention that the elite class of both societies only want peace.. How many times does your Indo-Pak cricket match chat include lets kill every Pakistani and then eat chill and un-wind ?

Our respective nations today are facing their worst diplomatic relations in the history of time.. oh k… Israel and Palestine beg to differ ! But it is time that nations sit and formulate a treaty together.. Indo-Pak or Pak-Indo.. does not matter. A new round of proposals will never succeed unless we are aware of being “HUMANISTS” first. Leaving with a little dialogue from the play, “ If mankind wanted peace there would be hundreds of diplomats and only 2 soldiers”